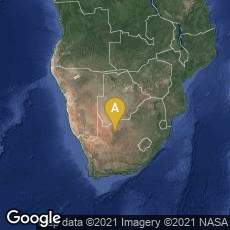 According to 2012 research on spear points excavated by Peter Beaumont at Kathu Pan 1, South Africa in 1979-1982, which remain arguably the earliest stone-tipped spears yet found, people began hunting with stone-tipped spears about 500,000 years ago. Prior to 2012 it was thought that attaching a stone tip to a spear, known as "hafting," started about 300,000 years ago.

"Hafting stone points to spears was an important advance in weaponry for early humans. Multiple lines of evidence indicate that ~500,000-year-old stone points from the archaeological site of Kathu Pan 1 (KP1), South Africa, functioned as spear tips. KP1 points exhibit fracture types diagnostic of impact. Modification near the base of some points is consistent with hafting. Experimental and metric data indicate that the points could function well as spear tips. Shape analysis demonstrates that the smaller retouched points are as symmetrical as larger retouched points, which fits expectations for spear tips. The distribution of edge damage is similar to that in an experimental sample of spear tips and is inconsistent with expectations for cutting or scraping tools" (Jayne Wilkins, Benjamin J. Schoville, Kyle S. Brown, Michael Chazan, "Evidence for Early Hafted Hunting Technology," Science 16 November 2012: Vol. 338 no. 6109 pp. 942-946 DOI: 10.1126/science.1227608)

"However, by comparing the wear visible on 500,000-year-old stone points found in South Africa with modern experimental points fired by a specially calibrated crossbow at a springbok carcass, scientists proved they had been used as spear tips for hunting. Leader author Jayne Wilkins, a PhD candidate in the Department of Anthropology at the University of Toronto in Canada, said the research suggested stone-tipped spears could have been in use before the divergence of early humans and Neanderthals. She said: "This changes the way we think about early human adaptations and capacities before the origin of our own species.

"Although both Neanderthals and humans used stone-tipped spears, this is the first evidence that the technology originated prior to or near the divergence of these two species."

"Attaching stone points to spears was an important advance in hunting weaponry for early humans. Hafted tools require more effort and planning to manufacture, but a sharp stone point on the end of a spear can increase its killing power. Hafted spear tips are common in Stone Age archaeological sites after 300,000 years ago" (http://www.telegraph.co.uk/science/science-news/9682459/Man-hunted-with-spears-half-a-million-years-ago.html, accessed 11-16-2012).