Tomb U-j at Abydos. The Burial chamber is the broad room at the rear (southwest end) of the tomb. 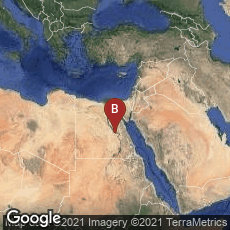 Bone and ivory tags, pottery vessels, and clay seal impressions bearing hieroglyphs unearthed at Abydos, one of the most ancient cities of Upper Egypt, 300 miles south of Cairo, have been dated between 3320 and 3150 BCE, making them the oldest known examples of Egyptian writing.

The tags, each measuring 2 by 1 1/2 centimeters and containing between one and four glyphs, were discovered in the late 20th century in Tomb U-j of Umm el Qu'ab, the necropolis of the Predynastic and Early Dynastic kings by excavators from the German Archaeological Institute in Cairo led by Günter Dreyer. Tomb U-j may hold the remains of predynastic ruler Scorpion I (Serket I). The discoveries in Tomb U-j were first published by Dreyer, Ulrich Hartung, and Frauke Pupenmeier in Umm el-Qaab. Volume 1: Das prädynastische Königsgrab U-j und seine frühen Schriftzeugnisse (1998).

"Tomb U-j is best known for three distinctive forms of administrative record keeping in the form of ink-inscribed vessels, sealings, and tags. The size of the tomb, its contents, and the amount of labor its construction and assemblage would have required has led many scholars to propose that this tomb belonged to a proto-ruler who reigned over a sizable territory by the Naqada III period. . . .

"The written evidence from Tomb U-j, in particular the tags, probably denotes quantities of good, and localities in Egypt and beyond. The Egyptian writing system had already undergone a number of important developments by the time of Tomb U-j, which have not yet been recovered, or have not survived to modern times. Linguistic terminology makes it psosible to identify the various units of language that helped to transform communication in early Egypt from merely pictorial expression to speech writing, which is important in identifying the nature of early graphic material:

"Moreover, writing on the tags shows that the Egyptian writing system had adopted the rebus principle, which broadened the meaning of symbols to include their homophones—words with the same sound but different definitions. . . ." (Elise V. Macarthur, "The Concept and Development of the Egyptian Writing System" IN: Woods (ed), Visible Language. Inventions of Writing in the Middle East and Beyond [2010] 120; the book illustrates many of the objects from Tomb U-j; see also 138-143).

"Prior to the proper scientific excavation of Tomb U-j and its publication in 1998, the earliest clear instances of Egyptian writing dated back to the late Dynasty o (ca. 3200-3100 BC), a few centuries later than in southern Mesopotamia. It had long been known that later fourth-millenium Egypt witnessed sustained cultural contract with southern Mesopotamia and Susiana, tokens of which are found in elements of foeign iconography on Egyptian prestige objects, the adoption of the cylinder seal, and niched brick architecture. This led to the —always controversial— hypothesis that Egyptian writing may have originated as a result of cultural infleunce from Mesopotamia, whether through general awareness that writing was present elsewhere, or possibly through some actual knowledge of the workings of the Mesopotamian system. The distinctively indigenous nature of the Egyptian repertoire of signs was interpreted as a case of cultural adaptation of a foreign technology to local purposes. The hypothesis of a Mesopotamian influence on the emergence of Egyptian writing was at times embedded into a broader frame arguing that the original invention of writing, conceived of as a dramatic cultural achievement, would have occurred only once in human history, subsequently to spread elsewhere.

"As to the latter issue, the decipherment of Mayan glyphs and other New World scripts, and the realization that these represent actual writing rather than pictography, now proves otherwise. Simultaneously, a more refined understanding of the working of early writing in general demonstrates that writing may develop gradually, rather than dramatically, a good case in point being, pr-ecisely, the stage witnessed by Tomb U-j" (Andréas Stauder, "The Earliest Egyptian Writing" IN: Woods (ed) Visible Language. Inventions of Writing in the Ancient Middle East and Beyond [2010] 142).