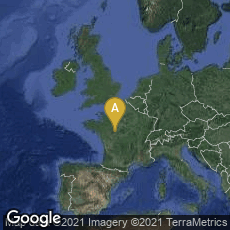 "The Hours of Henry VIII". An Example of the Persistence of Illuminated Manuscript Production 50 Years After the Introduction of Printing A product for the royal court of France, the "Hours of Henry VIII" illuminated by Jean Poyet about 1499, and preserved in the Morgan Library & Museum, is one of the most splendid manuscript Books of Hours from this period. This magnificently illustrated lay book of daily devotions and prayers contains fifty-five exquisitely hand-painted images.

♦ Even as the reach of printing expanded, the practice of commissioning luxury manuscript books of hours by wealthy patrons continued well through the sixteenth century. From the seventeenth century onward it noticeably declined. Production of these luxury manuscripts, in which the emphasis was on the illustrations, continued to provide employment for a declining number of scribes and illuminators, some of whom found employment in the printing trades or as the illustrators of printed books. The work of manuscript illuminators who worked with the new technology may also be seen in certain hand-colored deluxe copies of illustrated printed books produced during the fifteenth and sixteenth centuries.