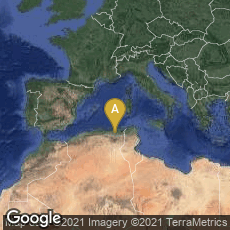 As a Result of Diocletian's Edict Against the Christians, Police Seize Thirty-Four Biblical Manuscripts in Africa On February 24, 303 Diocletian's first "Edict against the Christians" ordered the destruction of Christian scriptures and places of worship across the Empire, and prohibited Christians from assembling for worship.

"The police investigation of 19 May 303 into the Cirta (now Constantine) community in Africa reported the seizure of thirty-four biblical manuscripts: one very large, five large, two small, twenty-five of unrecorded size and one made up of four unbound quinions. The figures could suggest that there were a large number of Bible manuscripts in fourth-century Africa. Very many more must have been made when Christianity had survived the persecutions of Diocletian and as it expanded in the following centuries to the barbarian West. Even if Christianity was never to be planted as densely and as intensely in much of the barbarian West as it had been in Africa in the fourth and fifth centuries, there must have been thousands of Latin books of the Bible available in the centuries before 800; indeed they were so numerous that some, no longer wanted or appropriate, came to be discarded and their parchment reused for other texts before that date. Of these probably thousands only 363 have survived and are listed in the palaeographical guide to Latin manuscripts before 800, E. A. Lowe's Codices Latini Antiquiores" (McGurk, "The oldest manuscripts of the Latin Bible," IN: Gameson (ed) The Early Medieval Bible: Its production, decoration and use [1994] 1).