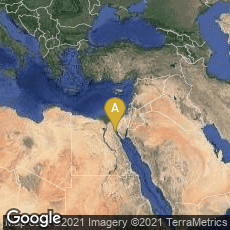 One of many papyrii found at Wadi al Jarf.  Thought to be the oldest known papyrii from Egypt.

Between 2011 and 2013 a French-Egyptian archaeological mission from the French Institute of Archaeological Studies (IFAO) headed by Pierre Tallet, an Egyptologist at the University of Paris, discovered the earliest known Egyptian papyri at the site of the most ancient harbor ever found, on the shore of the Red Sea at Wadi al-Jarf 119 km (74 mi.) south of Suez. The Wadi el-Jarf site is a harbor on the Red Sea shore that was used at the beginning of the IVth dynasty to reach the copper and turquoise mines of the south-western part of Sinai Peninsula. Along with numerous stone food and water storage jars, textile and wood fragments, hundreds of papyrus fragments were also found at the site, of which ten papyri are especially very well preserved. The documents relate to a team of sailors and mainly include two categories of documents: accounts of commodities delivered to the workers, and logbooks registering their daily activities over several months. Those last documents record missions led under the direction of the inspector Merer relating to the transport of limestone blocks from the quarries of Tura to the Great Pyramid of Khufu at Giza, then under construction on the opposite bank of the Nile.

One document is of special interest: the diary of Merer (Merrer, Mererer), an official involved in the building of the Great Pyramid of Khufu, often called the Great Pyramid of Giza. Using the diary, researchers were able to reconstruct three months of Merer's life, providing new insight into everyday lives of people of the Fourth Dynasty.

"The entries in the [Merer's] logbooks are all arranged along the same line. At the top there is a heading naming the month and the season. Under that there is a horizontal line listing the days of the months. Under the entries for the days, there are always two vertical columns describing what happened on these days (Section B II): [Day 1] The director of 6 Idjeru casts for Heliopolis in a transport boat to bring us food from Heliopolis while the elite is in Tura, Day 2 Inspector Merer spends the day with his troop hauling stones in Tura North; spending the night at Tura North.[13]

"In addition to Merer, a few other people are mentioned in the fragments. The most important is Ankhhaf (half-brother of Pharaoh Khufu), known from other sources, who is believed to have been a prince and vizier under Khufu and/or Khafre.[14] In the papyri he is called a nobleman (Iry-pat) and overseer of Ra-shi-Khufu. The latter place was the harbour at Giza where Tallet believes the casing stones were transported. [15] Several places are mentioned in the logbooks. Tura North and Tura South are the quarries." (Wikipedia article on the Diary of Merer, accessed 9-2020).

the most ancient harbor ever found: