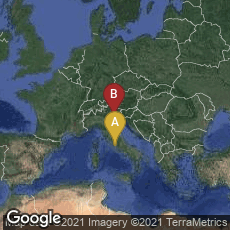 Before the development of the first regularly issued printed newspapers in the mid-17th century, from about 1500 to 1700, hand-written newsletters, known in Europe by various names such as avvisi, reporti, gazzette, ragguagli, nouvelles, advis, corantos, courantes, zeitungen, were the fastest and most efficient means by which military and political news could be circulated. From the middle of the 16th century newsletter writers in Italy especially, called menanti, reportisti, or gazzettieri, set up news services, the regularity of which may have been dictated by the postal service network in their region.  By this time postal services in various forms had developed over all of Europe.

Used to convey political, military and economic news quickly, avvisi first developed in Italy, especially in Rome and Venice, generated by the political intrigues and debates which were a feature of Italian courts at the time. and the desire of each court to know the activities of opposing and even allied courts.  Courts

"were perennially precoccupied with projecting a specific image of their own activities and equally, were comitted to penetrating the political activities and secrets of other courts. Printed gazettes, however, first developed as reports political activities involving the German states and the Flemish area, even though for a long time there was a link between these and the earlier, hand-written, manuscript Italian forms.

"The avvisi produced in Rome in the late sixteenth and early seventeenth century are very interesting for many reasons, in particular because they offered the rest of Europe a fairly well-developed, evolved model. . . . Perhaps, indeed, the sixteen-century roots of the avvisi lie in Venice rather than in Rome, but by the middle of the century they were well established in both cities. The news arrived, was gathered, 'packaged' and broadcast.

"It is not difficult to understand why these two cities, in particular, should have played a central role in the development of a 'news service'. The words of Vittorio Siri, explaining his reasons for choosing the place where he would work as a contemporary historian, offer one explanation. He says he needed 'a city like that which Plutarch sought for a historian, that is, where there was a great and powerful court, full of ambassadors and minsters', where 'more than in any other city in the world one could see a multitude of personages and soldiers who had been ambassadors at all the courts of Europe and where civil questions were managed by nobles, where people practiced who possessed refined judicial abilities and were knowledgeable about the affairs of princes. Sir was referring to Venice, bu the capital of the Roman Catholic church was no different. Indeed, only a few years earlier Maiolino Bisaccioni, one of the many adventurous historian-gazsetteers of the period, had declared 'Rome, as you know [is] the place where all the news in the world is found" ( Infelise, "Roman Avvisi: Information and Politics in the Seventeenth century" IN: Signorotto & Visceglia (eds) Court and Politics in Papal Rome, 1492-1700 [2002] 212-213).