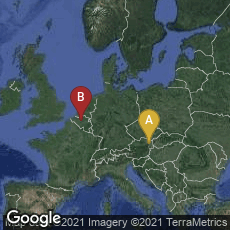 The Phenakistoscope, the First Device to Demonstrate the Illusion of a Moving Image In 1832 Belgian physicist Joseph Antoine Ferdinand Plateau (Joseph Plateau) of Brussels became first person to demonstrate the illusion of a moving image. Plateau's device, which he called the phenakistoscope ("spindle viewer"), used the persistence of motion principle to create an illusion of motion. It consisted of two disks, one with small equidistant radial windows, through which the viewer could look, and another containing a sequence of images drawn around the disk in concentric circles. When viewed in a mirror through the first disk's slots, the pictures on the second disk appeared to move. The synchronization of the windows and the images created an animated effect.  Also in 1832, Viennese mathematician and inventor Simon von Stampfer invented a similar device, which he called a stroboscope.

Two years later, 1834 when British mathematician William George Horner invented what came to be known as the zoetrope. Horner named his device a "daedalum," but it was widely called "the wheel of the devil." Perhaps the reference to the devil had less to do with Horner's device than with the often psychodelic and sometimes grotesque animated designs created for it.

Horner's invention made two significant improvements over the phenakistoscope: it could be viewed without a mirror, and more than one person could view the moving pictures at the same time.  Horner's device did not become widely popular until the 1860s when it was patented by both English and American makers, including the American game pioneer Milton Bradley. An American developer William F. Lincoln named his version of the toy the "zoetrope", meaning "wheel of life." This name became widely applied to the device.