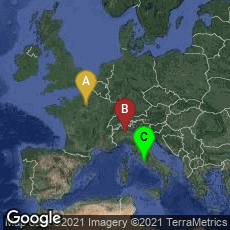 Gabriel Naudé Issues One of the Earliest Works on Librarianship While a medical student in 1627 Gabriel Naudé published in Paris one of the earliest works on book-collecting and librarianship: Avis pour dresser une bibliothèque.

Naude's book, written while he served as librarian for Henri de Mesme, Président à Mortier in the Parliament of Paris and councillor to Louis XIII, contained an early mention of the goal of creating a public universal library:

"And therefore I shall ever think it extremely necessary, to collect for this purpose all sorts of books, (under such precautions, yet, as I shall establish) seeing a Library which is erected for the public benefit, ought to be universal; but which it can never be, unlesse it comprehend all the principal authors, that have written upon the great diversity of particular subjects, and chiefly upon all the arts and sciences; [. . .] For certainly there is nothing which renders a Library more recommendable, then when every man findes in it that which he is in search of . . . ."

When Naudé wrote only three "public" libraries existed in Europe: the Bodleian Library opened at Oxford in 1602, the Bibliotheca Ambrosiana founded in Milan by Cardinal Federigo in 1609, and the Bibliotheca Angelica, opened for public service in Rome, also in 1609.

Naudé's work was first translated into English by John Evelyn, and published as Instructions Concerning Erecting of a Library in 1651.

Thomas Bodley Founds The Bodleian, the First "Public" Library in England, & the First British National Library
Philology Probably Begins at the Royal Library of Alexandria
The Codex Amiatinus: the Earliest Surviving Complete Bible in the Latin Vulgate, Containing One of the Earliest Surviving Images of Bookbindings and a Bookcase
The d'Orville Euclid, the Oldest Dated Manuscript of a Classical Greek Author
Four Copies of the Original Magna Carta Survived
The Cairo Genizah, the Largest and Most Diverse Collection of Medieval Manuscripts in the World
The Clarke Plato, the Oldest Surviving Manuscript of Plato's Tetralogies
A "Wild" or "Eccentric" Papyrus of the Iliad Recovered from Cartonnage
The "Hawara Homer"

Damage to Codex Atlanticus Caused by Efforts at Preservation
Lombards End the Continuity of Late Latin Culture in Most of Italy
Origen's Hexapla: Made Possible by the Codex Form, and the First Codices to Display Information in Tabular Form
The Bobbio Orosius Contains the Earliest Surviving Carpet Page in Insular Art