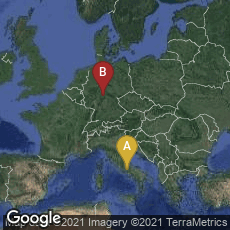 Roman Senator and historian Publius (or Gaius) Cornelius Tacitus, who lived from 56 CE to after 117 CE, wrote the Annales (Annals) and the Historiae (Histories), spanning the history of the Roman Empire from the death of Augustus in 14 to the years of the First Jewish–Roman War in 70, and the death of Domitian in 96. First published separately, with the Histories written and issued first, these two works were meant to form a continuous historical narrative in thirty books. Only about half of Tacitus's original thirty books survived, and their survival was dependent on just two manuscripts.

The first six books of the Annals survived in a single manuscript written in Germany about 1000, probably in the Benedictine Abbey of Fulda. This manuscript was later at Corvey Abbey, and is now in Florence at the Biblioteca Medicea Laurenziana (MS. plut. 68.1.) and referred to as MS M. (When I first read about this manuscript around 2013 its date was estimated at circa 850; however in 2019 the Laurenziana estimated its date as 1000-1100.)

"The script is a pre-carolingian hand which the scribe is changing to Carolingian minuscule, together with occasional small plain majuscules (a 9th century derivative of rustic capitals), a more ornamental version of these letters with decorative shading and some uncial elements, and also a few much larger and heavier capitals of essentially rustic form.  It is generally agreed that it was copied from a text written in 'insular' script which was copied from a manuscript in 'rustic capitals', and it has been suggested that this latter was at least 4th and probably 3rd century, based on an analysis of errors made in copying the titulature and colophons of each book, which are most easily explained if these errors occurred in copying a volume written in the early period in which prose texts were normally written in comparatively large letters and very narrow columns, and the colophons were not laid out in the manner common in 5th century and later books.

"At some time after it was written, the MS was transferred to the monastery of Corvey, in Saxony. There it remained, apparently without ever being copied.

"In 1508 the volume was removed from the library. A letter of Pope Leo X of December 1, 1517 indicates that it had been stolen, and that Leo had paid a large amount of money for it. At all events it passed into the hands of Pope Leo X.

"Leo gave the MS to Filippo Beraldo the Younger, who used it to produce the first edition in 1515, and left numerous annotations in the margins of the MS. The monks of Corvey, who petitioned the Pope for the return of their treasure, were instead sent a copy of the printed volume together with an indulgence to make up the balance" (http://www.tertullian.org/rpearse/tacitus/#2, accessed 11-20-2013).

Books 11-16 of the Annals, and what remains of the Histories, also survived in a single manuscript, written at the Benedictine Abbey of Monte Cassino, and also preserved in the Laurentian library (MS. plut 68.2.) This is referred to as M. II or 'second Medicean', to distinguish it from the unique codex of Annals 1-6. Like source M, this codex is dated by the Laurentiana to 1000-1100.

"This MS is written in the difficult Beneventan hand. It was written at Monte Cassino, perhaps during the abbacy of Richer (1038-55 AD). It derives from an ancestor written in Rustic Capitals, as it contains errors of transcription natural to that bookhand.  There is some evidence that it was copied only once in about ten centuries, and that this copy was made from an original in rustic capitals of the 5th century or earlier, but other scholars believe that it was copied via at least one intermediate copy written in a minuscule hand.

"How the MS came to leave Monte Cassino is a matter of mystery.  It was still at Monte Cassino, and was used by Paulus Venetus, Bishop of Puzzuoli, sometime between 1331 and 1344.  However Boccaccio had certainly seen the text by 1371, and the MS is listed among the books given by him at his death to the monastery of S. Spirito in Florence.  Whether he had 'liberated' it, or acquired it from another collector who had done so has been extensively debated, without final result.

"The MS is next seen in 1427, in the hands of the book-collector Niccolo Niccoli, who had furnished bookcases for Boccaccio's collection at S. Spirito. That Niccolo had not acquired the MS legitimately is suggested by a letter to him from his friend Poggio Bracciolini, asking to see it and promising to keep quiet about it.  Knowledge of the text among the humanists is correspondingly limited in this period.

"Poggio returned the MS to Niccolo, complaining about its barbarous script, and comparing it unfavourably with a copy of it in humanist script held by another mutual friend, Salutati.

"At Niccolo's death in 1437, the MS passed with his books to the monastery of San Marco at Florence with the Medici as executors, and the humanist copies all date from this period or later" (http://www.tertullian.org/rpearse/tacitus/#2, accessed 11-20-2013).

"The manuscripts of Varro, Tacitus, and Apuleius probably left Monte Cassino at the same time. They were rescued, as the phrase goes, by some humanist, who was probably none other than Boccaccio. To Petrarch the works of Tacitus and Varro were only known in name. The first to use these authors was Boccaccio; and this good fortune was granted him towards the end of his life. There can be no doubt that he possessed the Beneventan manuscripts of Tacitus and Varro which are now in the Laurentian library. This may be seen, on the one hand, from the copies of these manuscripts which he left in the Convent of S. Spirito in Florence, which correspond perfectly with the original; and from the fact that Boccaccio's citations from Varro and Tacitus, in his Geneologia deorum and De claris mulieribus, as Pierre de Nolhac has shown, are taken only from books preserved in the Beneventan manuscripts, and from no others.

"How these manuscripts came into Boccaccio's hands we do not know, but we can make a shrewd guess. We have reason to believe they were not presented to him during his visits to Monte Cassino. Attracted by the fame of the abbey, as he told his pupil Benvenuto da Imola, he paid it a visit. He found the library shamefully neglected, without bolt or lock, grass growing in the windows, dust thick on the books, monks using the precious manuscripts for turning out prayer-books, which they sold for a few soldi to women and children. Grieved unto tears he left the library 'dolens  et illacrymans recessit.' But none of this I fear, is to be taken seriously. It all sounds uncommonly like an apology. He seems to be anxious to show that it was only act of simple piety to remove the precious classics to a place of safety, say to Florence. The letter which he wrote in 1371 to the Calabrian abbot Niccolò di Montefalcone requesting the return of a quire from the Tacitus, suggests that he probably had accomplices. But no one can doubt that the Tacitus manuscript was dishonestly obtained after reading Poggio's letter of 27 September 1427 to Niccolò Niccoli: "Cornelium Tacitum cum venerit, observabo penes me occulte. Scio enim omnem illam cantilenam, et unde exierit et per quem et quis eum sibi vendicet; sed nil dubites, non exibit a me ne verbo quidem.' "

Poggio's statement was translated as, "When the Cornelius Tacitus comes I shall keep it hidden with me for I know that whole song, 'Where did it come from and who brought it here? Who claims it for his own?' But do not worry, not a word shall escape me." (Two Renaissance Book Hunters. The Letters of Poggius Bracciolini to Nicolaus de Niccolis, Translated from the Latin and edited by Phyllis Walter Goodhart Gordan [1974] 116.)

Tacitus's Opera, containing the Annales XI-XVI and the Historiae, was first published in print in Venice by Vindelinus de Spira, about 1471-72. ISTC. No. it00006000. In February 2014 a digital facsimile of this edition was available from the Bayerische Staatsbibliothek at this link.