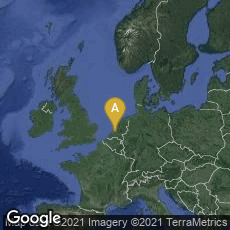 In 1628 Adriaan Vlacq, a bookseller, publisher, and human computer, computed and issued the first complete set of modern logarithms in Gouda through Petrus Rammaseyn printers. Four years earlier, in 1624, English mathematician Henry Briggs had published Arithmetica logarithma sive logarithmorum chiliades triginta, pro numeris naturali serie crescentibus ab unitate 20,000 et a 90,000 ad 100,000 changing the original logarithms invented by John Napier into common (base 10) logarithms. In 1626 Dutch surveyer and teacher of mathematics Ezechiel de Decker contracted with Vlacq for the publication of several translations of books by John Napier, Edmund Gunter and Henry Briggs. A first book was published in 1626, with several translations done by Vlacq. A second book was made of the logarithms of the first 10000 numbers from Briggs' Arithmetica logarithmica published in 1624. The logarithms were shortened to 10 places. In 1627, De Decker's Het Tweede deel van de Nieuwe telkonst  was published, containing the logarithms of all numbers from 1 to 100000, to 10 places, much of which had been computed by Vlacq. Only very few copies of this book are known and its publication was apparently stopped or delayed.This Tweede deel of 1627 was the first complete table of decimal logarithms.