Facsimile (restored) page of the Codex Beratinus on the left with an original page of the codex on the right. 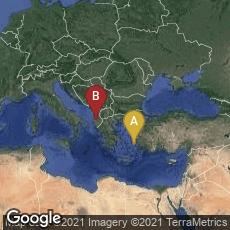 Actual page of the Codex Beratinus.

The Codex Purpureus Beratinus, an illuminated Greek Gospel book, was written in silver ink on purple vellum in the 6th century. It formerly belonged to the St. George Church in Berat, Albania, from which it received its appellation. The manuscript contains only the Gospel of Matthew and the Gospel of Mark, each of which has several lacunae. It contains 190 leaves, on which the texts are written in an uncial hand 17 lines per page in very regular, and comparatively large letters. The texts are generally of the Byzantine text-type.

The origins of the manuscript are unknown. It believed to have been originally at Patmos, but was held at Berat since 1358.

"The text of the codex was published by Pierre Batiffol in 1887. 'During World War II, Hitler learned of it and sought it out. Several monks and priests risked their lives to hide the manuscript.' Since 1971, it has been preserved at the National Archives of Albania in Tirana" (Wikipedia article on Codex Beratinus, accessed 03-08-2014).