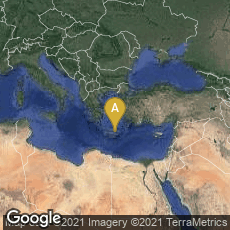 The Constitutional Law of Dreros: The Earliest Surviving Greek Law on Stone

The Constitutional Law of Dreros was carved on a block of grey schist at the temple of Apollo Delphinios at Dreros (Δρῆρος, Driros), a post-Minoan site near Neapoli in the regional unit of Lasithi, Crete, around 650-600 BCE. Apollo Delphinios was a sea-god especially worshiped in Crete and in the Greek islands; his name indicates his connection with Delphi, and the holy serpent Delphyne ("womb"). The inscription may be the earliest surviving Greek law on stone, and, it is certainly the earliest which survived complete. The law is one of a group of eight, of which one was written in Eteocretan, excavated from the same temple. It may provide evidence of the existence within the ancient Greek world of non-Athenian experiments in government by assembly.

Meiggs & Lewis, A Selection of Greek Historical Inscriptions to the End of the Fifth Century B.C. (1969) No. 2 (pp. 2-3 provide the following translation of the law:

"May God be kind (?). The city has  thus decided; when a man has been kosmos, the same man shall not be kosmos again for ten years. If he does act as kosmos, whatever, judgements he gives, he shall owe double, and he shall lose his rights to office, as long as he lives, and whatever he does as kosmos shall be nothing. The swearers shall be the kosmos (.e. the body of kosmoi) and the damioi, and twenty of the city."

"The ratification formula with its use of πóλις against the normal Cretan ethnic may reasonably be claimed as an early piece of evidence for the concept of the polis. The word does not appear elsewhere epigraphically until the late sixth century Kyzikos, Thasos, Arkesine, Poseidonia. . . .We have no means of telling whether the word implies the participation of the assembly as Willetts claims, or merely the authority of the city's officials (Ehrenberg).

"The law forbids the repeated tenure of the office of kosmos, presumably, as elsewhere in Crete, the chief magistracy, before ten years have elapsed. The provision is paralleled at Gortyn. . . sixth century, and it has generally been explained there by the need to make a break in the financial and legal immunity of a magistrate. The length of time which has to elapse in Dreros, however, suggests strongly that the motive was rather to limit the possibilities of using the office as a stepping-stone to tyranny (the first editors) or to bolster the power of an individual family (Ehrenberg, Willets). How severe the penalty involved was depends on whether ακρηστος implies total deprivation of civic rights or deprivation merely of the right to hold certain magistracies. Dispute over the implications of the word involves the interpretation of the phrase χρηστους ποîεν in the archaic treaty between Sparta and Tegea (Plutarch, Greek Questions, 5. . . . ).

"The list of those who swear the oath, presumably every year, includes two unknown offices. The δαμιοι have been generally identified with the Gortynian τιται as financial supervisors. 'The twenty of the city' have been identified as a committee of the assembly (Willetts) a committtee of the council (the first editors), the council itself (Ehrenberg).The last seems the most probable."