The restored National Library of Bosnia & Herzegovina from an image dated 2014 posted in the Wikipedia. 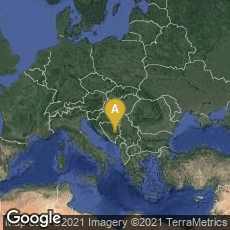 A: Sarajevo, Federacija Bosne i Hercegovine, Bosnia and Herzegovina

Destruction of the National Library of Bosnia & Herzegovina The remains of the National and University Library of Bosnia and Herzegovina after the destruction.

On August 25, 1992, Serbian shelling during the Siege of Sarajevo completely destroyed the National and University Library of Bosnia and Herzegovina (NUBBiH) (Bosnian, Croatian, and Serbian: Nacionalna i univerzitetska biblioteka Bosne i Hercegovine) in Sarajevo, the capital and largest city of Bosnia and Herzegovina. Before the attack the library held 1.5 million volumes and over 155,000 rare books and manuscripts. Among the losses were were about 700 manuscripts and incunabula, and a unique collection of Bosnian serial publications. Many of the rare volumes reflected the multicultural life of the region under the Ottoman and Austro-Hungarian empires. In May 2014 an image of the destroyed building, showing the ashes of over 1 million books, was available at this link.

The building, known in Sarajevo as "Vijecnica" (city hall), opened in 1896. Facing the Miljacka river and hills from which the Serb artillery set it ablaze, it stood out in the city's old Turkish quarter with its dark orange and yellow horizontal stripes and Islamic-style arches. After the years of restoration, the National and University Library of Bosnia and Herzegovina was re-opened on May 9, 2014 to mark the centenary of the start of World War I, triggered by the assassination of Archduke Franz Ferdinand of Austria just after he left a reception there in June 1914.

Franz Ferdinand, heir to the Austro-Hungarian throne in Vienna, attended a reception at Vijecnica on June 28, 1914 after surviving a failed assassination attempt. Just after leaving, he and his wife were shot dead in their open car by Serb assassin Gavrilo Princip. The assasination of Archduke Franz Ferdinand lit the fuse for World War I, during which more than 10 million soldiers died, and the map of Europe was redrawn, ending Vienna's empire and creating the new state of Yugoslavia. That multinational state began to fall apart in 1991. War among the Serb, Croat and Muslim populations in Bosnia and Herzegovina began in 1992 and lasted until late 1995.

The restored Vijecnica will house the national and university libraries, the city council and a museum documenting its own history.