View of one of the Albion Mill steam engines, from an encyclopedia, c. 1820.

Circular silver-plated commemorative medallion. commemorating the Invention of James Watt Steam Engine, made by D Thomason, England, 1800-1825. On the obverse is a central diagram of a steam engine, a history of James Watt's invention and the legend 'MR. WATT'S SINGLE ACTING STEAM ENGINE'. The reverse continues the explanation of the steam engine. The maker's name is near the rim. The edge is plain. Maker's name on reverse 'THOMASON.D.' Jeremy Norman Collection of Images -&nbspCreative Commons
Image from Watt's 1782 patent as engraved for Muirhead's book. Muirhead reproduced far higher quality images of the patent drawings than were later reproduced by British government, and, his book was printed on high quality paper throughout. 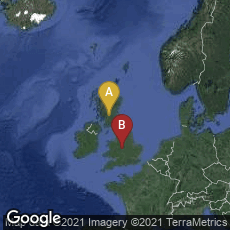 Mezzotint portrait of Watt engraved by S.W. Reynolds after the painting by C F. de Breda, 1796.

In 1763 Scottish inventor and mechanical engineer James Watt first turned his attention to steam engines when he was asked to repair a model Newcomen engine belonging to the University of Glasgow. After much experimentation Watt demonstrated that about three-quarters of the thermal energy of the steam was being consumed in heating the engine cylinder on every cycle. This energy was wasted because later in the cycle cold water was injected into the cylinder to condense the steam to reduce its pressure. By repeatedly heating and cooling the cylinder the engine wasted most of its thermal energy rather than converting it into mechanical energy. Watt's first key discovery, which he achieved in May 1765, was to cause the steam to condense in a separate chamber apart from the piston, and to maintain the temperature of the cylinder at the same temperature as the injected steam by surrounding it with a "steam jacket." By this method very little energy was absorbed by the cylinder on each cycle, making more available to perform useful work.

Watt's next major contribution was the sun and planet gear invented by the Scottish engineer William Murdoch, an employee of Boulton and Watt in Birmingham, but patented by Watt in October 1781. Invented to bypass the patent on the crank held by James Pickard, the sun and planet gear played a key role in the development of devices for rotation in the Industrial Revolution.

Over the next six years Watt made a number of other improvements and modifications: a double acting engine, in which the steam acted alternately on the two sides of the piston, and a compound engine, which connected two or more engines. For these he received patents in 1781 and 1782. Another improvment was the steam indicator which produced an informative plot of the pressure in the cylinder against its volume, which he kept as a trade secret. His other important invention was parallel motion which was essential in double-acting engines as it produced the straight line motion required for the cylinder rod and pump, from the connected rocking beam, whose end moves in a circular arc. This was patented in 1784. In 1788 Watt invented the centrifugal governor to regulate the speed of his steam engine. This created interest in other feedback devices. All together Watt's improvements produced an engine which was up to five times more fuel efficient than the Newcomen engine.

As far as I was able to determine in 2021, Watt's patents were first published by James Patrick Muirhead in the third volume of his work, The Origin and Progress of the Mechanical Inventions of James Watt, Illustrated by his Correspondence with his Friends and the Specifications of his Patents. 3 vols. London: John Murray, 1854. Watt's threee most significant patents were:

1306. Specification of Patent, October 25th, 1781, for Certain new Methods of Applying the Vibrating or Reciprocal Motion of Steam or Fire Engines, to Produce a Continued Rotative or Circular Motion Round an Axis or Centre, and Thereby to Give Motion to the Wheels of Mills and Other Machines.

1321. Specification of Patent, March 12th, 1782, for Certain New Improvements upon Steam or Fire Engines for Raising Water, and Other Mechanical Purposes, and Certain New Pieces of Mechanism Applicable to the Same.

1432. Specification of Patent, April 28th, 1784, for Certain New Improvements upon Fire and Steam Engines, and Upon Machines Worked or Moved by the Same.