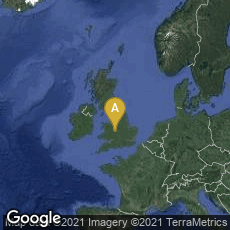 Layamon's "Brut", the Earliest Source of the Legends of King Arthur and the Knights of the Round Table Image Source: www.bl.uk
The incipit from Layamon's Brut, Cotton MS Caligula A IX in the British Library, c. 1250-1300 CE. (The Cotton shelfmark indicates that this manuscript was shelved under the statue of Caligula in Cotton's library). Note the reference to Robert Cotton in the upper right corner of this leaf.

Brut, a Middle English poem compiled and recast by the English priest Layamon (Laȝamon or Laȝamonn; occasionally written Lawman), was the first historigraphy written in English after the Anglo-Saxon Chronicle, and the first work in the English language to discuss the legends of King Arthur and the Knights of the Round Table. It survived in two manuscripts both preserved in the Cottonian Library in the British Library: MS. Cotton Caligula A IX, dating from the third quarter of the 13th century, and the Cotton Otho C xiii, copied about fifty years later.

Layamon who lived at Areley Kings in Worcestershire, and wrote at a time in English history when most prose and poetry was composed in French, chose to write in English for his illiterate, impoverished religious audience. His poem is considered one of the best examples of early Middle English.

The work was first published in print as Laȝamon's Brut, or Chronicle of Britain, a Poetical Semi-Saxon Parapharase of the Brut of Wace. Now First published from the Cottonian Manuscripts in the British Museum accompanied by a Literal Translation, Notes and a Grammatical Glossary by Sir Frederick Madden (3 vols., London: The Society of Antiquaries, 1847.

The Oldest Surviving Copy of the Anglo-Saxon Chronicle: The First Continuous History Written by Europeans in their Own Language
The Withdrawal of Roman Legions from Britannia Results in the End of Literacy in the Region
Book Collector Matthew Parker Donates his Library to Corpus Christi College, Cambridge