Jeremy Norman Collection of Images -&nbspCreative Commons
Recto of the original list of subscribers in my copy of Minsheu's dictionary. Jeremy Norman Collection of Images -&nbspCreative Commons
Pages 2 and 3 of the facsimile of the unique copy of Minsheu's prospectus. Last page of the facsimile of Minsheu's 4-page prospectus, of which only 1 copy of the original printing survived. 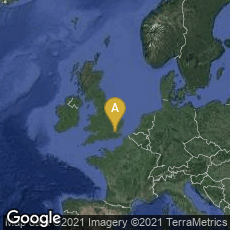 Minsheu's "Ductor in Linguas," The First Book Sold by Subscription and the First Book to Include a List of Subscribers English linguist and lexicographer John Minsheu's (Minshew) Ηγημων εις τας γλωσσας. Ductor in linguas, The Guide into Tongues  (London, 1617) was the first book published by advance subscription using a printed prospectus, and the first book to include a list of subscribers. The unusually elaborate blingual Latin and English title page of this dictionary into eleven languages states that it was "By the Industrie, Studie, Labour, and at the Charges of John Minsheu Published and Printed."

Though the STC records no less than ten variant editions of the broadsheet list of subscribers found in some copies, each with increasing numbers of names, scholars have disputed whether Minsheu actually sold the first edition of his book by subscription. For example, in the authoritative Cambridge History of the Book in Britain Volume IV 1557 to 1695 (2002) the editor of the volume John Barnard states on p. 9:

"John Minsheu's multilingual dictionary, Ductor in linguas (made up of 726 folio pages using Greek, Anglo-Saxon and Hebrew characters as well as roman, black lettter and italic) on which he began work in 1599, was given a royal patent in 1611. Minsheu, however, was unable to raise the capital to publish the book until 1617; in so doing so he sought the support of the two universities, the Inns of Court, and 'divers Honorable and Right Worshipfull Personages, Bishops, and others', including merchants and London citizens; even so money ran out in the course of printing and the work was done at different times by two different printers. It was this difficulty which led to the publication of the second edition in 1625 by subscription, the first English example of this practice, one revived in the 1650s and taken up by the trade in the 1670s and 1680s."

Later in the volume, the co-editor of the same volume of The History of the Book in Britain, D. F. McKenzie, makes a similar assertion on p. 565, footnote 33. However, neither scholar seems to be aware of the unique prospectus for Minsheu's book preserved in the John Johnson Collection in the Bodleian Library. The working title given for the book on the prospectus is Glosson-Etymologicon. (Id est.) the Etymologie of Tongues. It is nevertheless clear that the prospectus is for the work later published as Ductor in linguas in 1617 as the 4-page folio-size prospectus (2 conjugate leaves) describes a dictionary in eleven languages with typography and format identical to the 1617 edition. The unique copy of the prospectus, which contains an internal date of 8 December 1610, was reproduced in facsimile by John Feather in English Book Prospectuses, An Illustrated History (Newtown: Bird & Bull Press, 1984). Feather, who believed that the prospectus was issued in 1611, stated on p. 28:

"The only earlier prospectus known to Pollard and Ehrman [The Distribution of Books by Catalogue to AD 1800 (1965)] cannot have been known to Minsheu. This was a manuscript proposal issued by Botel and Hurus in Savagona, Spain, in 1476, which solicits support for a new printed edition of the statutes of the Kingdom of Aragon. Stow's failure and the lack of any credible precedent lead me to regard Minsheu's Guide into tongues as the first subscription book, and John Minsheu himself as the pioneer, and for all practical purposes the inventor, of the book prospectus.

Minsheu's campaign was, in the end successful. The 417 subscribers in the final list represent a remarkable market for such a book in early seventeenth-century England. The figure, superficially small, has to be seen in the context of edition sizes limited by law to 1,250 and rarely reaching even that number. Indeed, in view of the trade's attitude in 1610 Minsheu had every reason to feel pleased with himself. Ironically, only five years after publication, the bookseller John Haviland issued an unauthorized reprint which infringed Minsheu's rights under his Letters Patent: Haviland was duly fined forty shillings by the Court of Assistants of the Stationers' Company on 5 April 1624."

My copy of Minsheu's book is bound in a contemporary binding of calf stamped with the Royal Arms in the center of the upper and lower covers. Several recorded copies of the first edition seem to be bound identically, but this fact remains unexplained.

Almost nothing is known about Minsheu. He was probably born in 1559 or 1560. The ODNB says he was of "unknown parentage," and provides what little information about his family. Minsheu refers to a cousin living in Oxfordshire, John Vesey, who was a self-made man of dubious probity. Minsheu may have resembled him in these two respects: he was educated by extensive travels rather than in a university, and he was described as a rogue by Ben Jonson. Minsheu apparently learned much of his Spanish while he was imprisoned in Spain. Nevertheless, the immense amount of information in Ductor in Linguas requires it to be taken seriously. In "John Minsheu: Scholar or Charlatan," Renaissance Quarterly 26, No. 1 (1973) 23-35 Jürgen Schäfer writes, on pp. 23-24:

"More than any other English work of the period the Ductor in Linguas reflects linguistic research and speculation at home and abroad and represents an important link in the beginnings of modern English lexicography. On the basis of this work Minsheu has been praised as a scholar, antiquarian, and etymologist of note. Closer inspection reveals, however, that such a blank judgment is seriously misleading and in need of revision. The following essay seeks to show in contrast to some of his contemporaries, Minsheu was an amateur of linguistic theory, an eclectic who incorporated linguistic material as he found it without subjecting it to any rigorous intellectual analysis. His etymologies, especially those which seem to qualify him as a leading student of the history of the vernacular, provide the cornerstone of his scholarly reputation, yet most of these are not original but have been drawn, often verbatim, from John Cowell's Interpreter (1607) — a dependence which has not yet been pointed out. From this new perspective Minsheu deserves praise as a teacher and disseminator of foreign languages. His scholarly credentials, however, are at best questionable.

"There is no doubt that the Ductor in Linguas is a monumental work. No less impressive than the title are the size and the contents of this volume. On more than 500 closely printed folio pages English lemmata are followed by their etymologies and their equivalents in ten other languages, 'British or Welsh, Low Dutch, High Dutch, French, Italian, Spanish, Portuguez, Latine, Greeke, Hebrew.' In addition to Roman, black letter, and italics, the favorite triad around 1600, the compositors were also required to use Greek, Hebrew, and Anglo-Saxon letters. Long and learned prefaces in Latin and in English introduce the work, and there are two commendatory certificates, one by the University of Oxford and another by some of the leading scholars of the day. Both of these certificates are dated from the end of 1610 when the work had apparently been in progress for several years. In addition, a list of purchasers contains illustrious names from the court, as well as the study. Througout his introductions Minsehu stresses the number of collaborators and the amount of time and money invested in the enterprise, and the extent of his labor seems stupendous. Learned etymologies, definitions, multilingual equivalents, illustrative quotations, and precise bibliographic references crowd the pages, and the fact that the work was published at all may be more noteworthy than the many years of preparation."