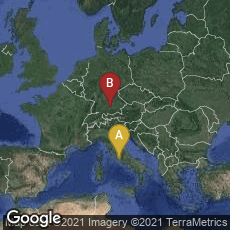 Jerome's "De viris illustribus", the First Work to Stress the Bibliography Rather than the Biography of Eminent Writers St. Jerome by El Greco. The Metropolitan Museum of Art.

The first work about famous men (chiefly members of the Church) to stress bibliography rather than biography was the De viris illustribus by the Illyrian Latin Christian priest, theologian and historian Jerome  (Eusebius Sophronius Hieronymus; Εὐσέβιος Σωφρόνιος Ἱερώνυμος), composed in Bethlehem in 392, and its continuation by Gennadius of Massilia (Gennadius Scholasticus or Gennadius Massiliensis) compiled in 480. The work was written to prove that the Church had produced learned men.

According to Theodore Besterman, The Beginnings of Systematic Bibliography 2nd ed (1936) pp. 4-5, Jerome pointed out that his book ought to be titled De scriptoribus ecclesiasticis (On Religious Writers), rather than De viris illustribus (On Illustrious Men). However, the first title stuck. The two works first appeared in print in the first printed edition of Jerome's Epistolae edited by Theodorus Lelius. This edition, published without identification of place, publisher or date, is estimated by the ISTC (No. ih00160800) to have been published in Rome by Sixtus Riessinger "not after 1467". Still, the ISTC qualifies this with "Also recorded as [about 1466-67] and [not after 1470] and [Naples: Sixtus Riessinger, about 1473-74]". In this edition Jerome's bibliography occupies 28 pages in the second volume, immediately followed by Gennadius's continuation, which occupies the following 16 pages. In February 2015 a digital facsimile of the second volume containing the works in question was available from the Bayerische Staatsbibliothek at this link.

The two works were first published in print separately in another edition printed without place, publisher or date. Bibliographers identified this as issued in Augsburg by Günther Zainer before 1473; however a copy in the library of Roland Folter has the date [14]72 added by the rubricator indicating that the edition was available in 1472. ISTC No. ih00192000.

Breslauer & Folter, Bibliography, its History and Development (1984) No. 3.

Printing by Handpress or by Hand
Bibliography
Religious Texts / Religion