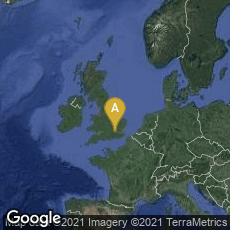 John Dee, the English mathematician, astronomer, astrologer, occult philosopher, imperialist, and adviser to Queen Elizabeth I, devoted much of his life to the study of alchemy, divination, Hermetic philosophy, and medicine, though he was not a trained physician. One of Tudor England's most extraordinary and enigmatic figures, Dee claimed to own 3000 printed books and 1000 manuscripts, which he kept at his home in Mortlake, London. These were recorded in his library catalogue, a document which surivived and was edited for publication by Julian Roberts and Andrew Watson as John Dee's Library Catalogue (London: Bibliographical Society, 1990). Dee was a persistent annotator of his books, many of which contain extensive, elegantly written legible notes very worthy of study.

In May 2016 it was my pleasure to visit the Royal College of Physicians in London with members of The Grolier Club to see an exhibition of the more than 100 books from John Dee's library preserved in the library of the RCP. That group, which remains the largest collection of volumes from Dee's library, remarkably, appears to have been stolen, or otherwise parted, from Dee's library when Dee traveled to the Continent in the 1580s, leaving his extremely valuable library and laboratories in the care of his brother-in-law Nicolas Fromond. Instead of caring for the books and scientific instruments Fromond appears to have sold them without Dee's permission, causing most of them to be widely dispersed, to such extent that Dee was never able to recover most of them.

Either by purchase or possibly by theft, the books from Dee's library at the College of Physicians came into the possession of Dee's pupil Nicholas Saunder the Younger who attempted in many cases to conceal Dee's signature or other mark of ownership by overwriting with his own. Saunder's books passed to Henry Pierrepont, Marquis of Dorchester, who was a devoted book collector. Pierrepont's family later donated his library to the Royal College of Physicians.