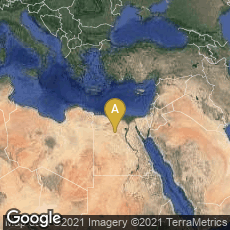 The Ramesseum Onomasticon Administrative/Literary Categorization May Represent the Earliest Record of a Knowledge Organization System. Image Source: www.britishmuseum.org
"Papyrus Ramesseum D (P. Berlin 10495). Frame 6. Papyrus written on the recto in hieratic script. The recto contains an onomasticon. The text is written in numbered horizontal lines with the item's determinatives arranged in a separate sub-column. This frame contains three pages, with lines 249-278. These lines contain bread and cakes, grain and body-parts. The papyrus was originally a half-height roll.

"The papyrus is part of the collection of papyri found with a bundle of pens in a chest from a plundered late 13th dynasty tomb under the Ramesseum, apparently belonging to someone like a lector priest. Two of the papyri from the chest are in the Egyptian Museum and Papyrus Collection Berlin (P. Ramesseum A and D); the rest are in the British Museum. The objects found with the papyri are in the Fitzwilliam Museum Cambridge and the Manchester Museum"

The Ramessum Onomasticon, which dates from the end of the Twentieth Dynasty of Egypt, no earlier than the reign of Ramesses IX, may be the earliest surviving record of a knowledge organization system. This document is preserved in papyri called the Onomasticon of Amenope, an onomastics compilation that began in the Middle Kingdom. The Ramessum Onomasticon is an administrative/literary categorization of 610 entities organized hierarchically, rather than a list of words (glossary). It is known from ten fragments including versions on papyrus, board, leather, and pottery. Of the nine surviving copies, that preserved in the Golénischeff papyrus is the most complete.

"The first copy of the Onomasticon of Amenope was discovered in 1890 at al-Hibah, Egypt. It was subsequently purchased in 1891 in Cairo by the Russian Egyptologist Vladimir Golenishchev. It was found in a jar together with the Report of Wenamun and the Tale of Woe.
A partial copy was found on the back side of the EA10474 papyrus available at the British Museum. It was analysed by Herbin.[5]

"The Onomasticon of Amenope is an important resource for scholars studying ancient Egyptian life, the pharaonic administration and court, the priesthood,[6] the history of the Sea Peoples,[7] the geography and political organization of the Levant during the late New Kingdom and Third Intermediate Period,[8] early Bible studies, etc." (Wikipedia article on Onomasticon of Amenope, accessed 01-16-2018).

Thanks to Claudio Gnoli for suggesting this entry.