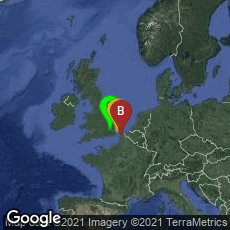 In 1850 telegraphic engineer John Watkins Brett and his brother Jacob Brett laid the first telegraph cable between England and France. After a French fisherman cut the cable, thinking it was a new kind of seaweed, in September 1851 the brothers installed an armored cable that lasted for many years. Their Submarine Telegraph Company between France and England became operational from London though Dover and Calais to Paris on November 13, 1851.  Messages were transmitted through the submarine cable from Calais to Dover, the narrowist point in the English Channel, from which they were passed to the South Eastern Railway for telegraphing to its London Bridge Station, and then by messenger to the telegraph company’s office.