Emblem incorporating the Crystal Palace stamped into the original cloth binding of the 19th volume of The Illustrated London News. 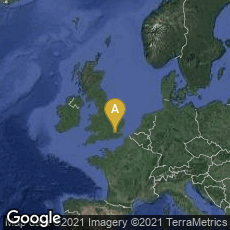 From May 1 to October 15, 1851 The Great Exhibition of the Works of Industry of All Nations took place in the 990,000 sq. ft.(92,000 sq. m.) Crystal Palace, Hyde Park, London. The coverage of the Great Exhibition by the Illustrated London News was as remarkable for the depth of its text as for the quantity and quality of its black and white woodcut illustrations, with the News periodically issuing various "Exhibition Supplements" covering different aspects of the exhibition .

The main difference between the way this tabloid covered the Great Exhibition and the way it would be covered by a "modern" tabloid, other than the method of reproducing the many illustrations, was the extent of the printed text, set in small type. A chief difference between the way early and mid-19th century readers read publications and the way we read them today was the more long-winded style of journalism, fit onto the pages in type that was considerably smaller than what we are expected to read today. Victorians in particular seem to have been accustomed to reading very small print. I have not seen a study on how this might have affected their vision, or the vision of the large number of typesetters who were required to set these very long texts in very small type, very speedily, by hand.

In their May 31 issue the News featured in an article and full-page illustration Applegath's Vertical Printing Machine that was operating during the exhibition and printing sheets that were actually issued in parts of the magazine. In my copy of Vol. 19 of the Illustrated London News on the foot of page 521 in the issue of June 7, there is the statement at the foot of the page: "THIS SHEET WAS PRINTED IN THE GREAT EXHIBITION."

I have transcribed the complete article about Applegath's machine published on May 31. Readers will notice the intricate explanation of the mechanism, virtually as complete as would be required in a patent:

"It seems necessary, before describing the beautiful machinery of Mr. Applegath, erected at a great cost, for printing the Illustrated London News within the walls of the Crystal Palace, to say a few words as to the rapid progress which has been made of late years in the multiplying power of this important class of machinery. Before the introduction of steam, and even for many years after, the largest number of newspaper sheets which could be printed off in one hour amounted to only one-fourth of the number which were thrown off on the first introduction of 'self-acting and steam-impelled machinery' by the spirted proprietors of the Times. This wonderful and important change took place in November, 1814; since which time the whole appearance, even of the most improved printing-offices, has been entirely changed. As the power of production in the case of newspapers, as in that of manufactures, has been increased from year to year, in a great measure owing to that wonderful agent steam, so has the demand gone on increasing in a ratio truly astonishing. This demand required on the part of newspaper proprietors generally, and especially of those of the Times, compelled to call in the aid of men well skilled in mechanical arrangements to design a machine capable of throwing off 4000 printed sheets per hour instead of 1000. This problem was accomplished by Messrs. Cowper and Applegath, who had already effected many improvements in the printing press. The solution of this problem was effected by the introduction of four paper cylinders, and four sets of inking-rollers, instead of one of each such cylinders, as formerly; while one form, as before, containing the type, was made to pass over the various rollers, first in one direction and then in the other.

"Within a few years, the circulation of the Times has increased to so great an extent that the ordinary reciprocating machines were found to be unavailing in suppplying the enormously increased demand; and instead of four thousand copies in an hour, Mr. Applegath was requested to tax his ingenuity in order to produce a machine capapble of printing 10,000 sheets within the same time. It would be interesting to know the numerous difficulties which, in all probability, presented themselves, in practically solving this extraordinary problem, suffice it to say that such a machine was produced, and has now been successfully worked for a considerable period. Those of our readers who have had the good fortune to see Mr. Applegath's vertical printing machine at work in Printing-house-square, will not be taken by surprise by that which forms so interesting an object on the north side of that department of the Exhibition appropriated to 'machines in motion,' as it is in principle precisely the same, but of less power.

"The greatly-increasing demand for the Illustrated London News had induced the proprietors, in order to insure an early weekly delivery to their customers, to apply to Mr. Applegath to put up one of his vertical printing-machines in the Crystal Palace, which, while it will enable the proprietors to facilitate the Saturday morning early delivery, will also gratify the millions of enquiring visitors to the Great Exhibition. It must be convincing to our readers that the task we have weekly to perform— of conveying the most recent intelligence by a real representation is far more difficult than merely setting up in type a few sentences which may be effected in a very short time, and issued from the press almost immediately afterwards. Very different is our task. The object to be artistically represented, at whatever distance from the printing office, must be seen by the artist and must then be rapidly, as well as faithfully, transferred to the wooden block to be engraved, and which by an ingenious division of labour, is accomplished in an inconceivably short space of time. It must be remembered, that, the woodcuts, once engraved, can neither be increased, nor decreased in size, nor can any material alteration be made therein.

"When the wood-cuts and type are got into the requisite dimension, the pages are fixed in the iron frames, or chases, and are transferred to the printing machine, for the purpose, in the first instance, of undergoing a very important and delicate operation called 'overlaying,' by which the pressure is diminished in the lighter parts of the engravings and increased in the dark shadows, without attenton to which the artistic effects would be entirely lost. This overlaying is sometimes a very tedious and difficult process. While all those preliminaries are in progress, the hour of 'going to press' is rapidly advancing; and although more time might often be very profitably employed in giving the best possible effects to the cuts, so as to gratify not only the public, but the artist himself, yet in order to throw off the requisite number of copies within a limited period, all other considerations must be set aside. Thus, between the desire of delineating the most recent objects of public interest, and that of producing them in large quantities, and at the same time in the most artistic style, a kind of antagonism has existed, which has only been neutralized by the most intense exertions on the part of all concerned; and we now venture to hope that the difficulties we have had to contend with will entirely be done away with, as the improved machinery, by its increased power of production, will render such impediments less likely to occur.

"We now proceed to furnish our readers with some account of the Applegath Vertical Printing Machine, which has already attraced crowds of visitors from some of the more generally enticing sections of the Great Exhibition.

"The chief novelties of this machine are, first, the type being placed around a large cylinder, placed vertically, thus leaving impressions on several sheets of paper at each revolution; and second, that, by such arrangement, a far greater number of copies can be produced within a given time than by any reciprocating machine yet invented.

"As this machine is calculated to throw off four impressions for each revolution of the cylinder, it is necessary to introduce as many sheets of blank paper at the same time. This is done by the 'layer on,' who draws a sheet towards the upper rollers, when a small iron spindle furnished with brass pulleys, revolving at considerable velocity, descends upon it, causing it to pass between the sets of vertical tapes, which carry it down to a point at which is course is altered by narrow upright pieces of wood, called 'stoppers,' which advance and compress the sheet of paper between them, the vertical tapes at the same time receding from the paper. In the next place, the stoppers recede, and the paper is momentarily supsended between small pulleys, mounted on delicate springs, called 'finger' rollers. The sheet is now impelled toward the impressing cylinder by means of vertical rollers in rapid motion on either side of the sheet, which is secured by the ordinary marginal tapes, and passing round the impressing cylinder, receives an impression from the type fixed in the great vertical cylinder. The sheet, thus printed, passes towards the 'taking-off' table, being supported in its progress by the upper pair of tapes, which are stopped at the proper time, leaving the sheet suspended between small spring pulleys above it, until the 'taker-off' removes it to the table.

"The type cylinder, which is really the great feature of the invention, consists of three strong circular rings of cast iron, securely keyed to an upright spindle. The segmental chases, which contain the type and wood-cuts, are attached to the circular -rings by screws.

"The surface of the impressing cylinders is made partly of fine woolen cloth, and partly of paper, or from card board, reduced in those parts requiring the overlaying, by cutting or scaping, according to the thickness required. The ink is carefully spread over a circular invert opposite to the type, and connected to the vertical spindle of the type cylinder by hinged arms resting on an upright bar, which is terminated by a pulley. This pulley acts upon a circular undlating railway fixed below the type cylinder, and from which the distributing surface receives a slight up-and-down motion as it revolves. The distributing surface is fed with ink by means of vibratory rollers which continue in action between it and the upright ink boxes placed under the copper reservoirs.

The contact of the inking-rollers with the type is regulated by long coiled springs connected with the bearings so that they merely touch the surface of the letters, which is one of the great advantages of this arrangement. It is only necessary to mention, that in the case of the Times machine, 40,000 impressions have been taken without any differences being discovered between the first and the last. Another advantage of the verical machine is, that the dust or small particles adhering to the paper are shaken from it when suddenly stopped, and fall to the floor, instead of being deposited upon the form or distributing table, as in the case of horizontal machines.

"Mr. Applegath is still occupied imaking further improvements this valuable invention, with a view to render it suitable for the printing business generally."