Thrashing machines, an archaic term for threshing, as depicted in Jamieson, Dictionary of Mechanical Science...(London, 1827). This and the following page in Jamieson's book show how primitive the threshing machine mechanism remained at the time of the Swing Riots. Note that the machines were powered by horse or water and still required six men for their operation. Continuation of the article on threshing machinery from Jamieson's mechanical encyclopedia (1827). 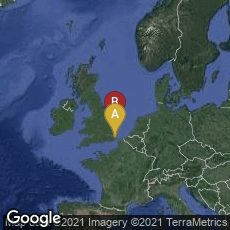 Image Source: books.google.com
A fictional autobiographical account of the life of Francis Swing, the fictitious character after whom the Swing Riots were named. Swing was similar to General Ludd, the fictitious character after whom the Luddites took their name. This pamphlet was published by the radical writer and publisher Richard Carlile. WorldCat Identities cites various other works purportedly by or about Francis Swing.

"It began with their destruction of threshing machines in the Elham Valley area of East Kent in the summer of 1830, and by early December had spread throughout the whole of southern England and East Anglia.[1]

"The first threshing machine was destroyed on Saturday night, 28 August 1830 and, by the third week of October, more than 100 threshing machines had been destroyed in East Kent. As well as attacking the popularly hated threshing machines, which displaced workers, the protesters rioted over low wages and required tithes, destroying workhouses and tithe barns associated with their oppression. They also burned ricks and maimed cows.[1][2]

"The rioters directed their anger at the three targets identified as causing their misery: the tithe system, requiring payments to support the established Anglican Church; the Poor Law guardians, who were thought to abuse their power over the poor; and the rich tenant farmers who had been progressively lowering workers' wages while introducing agricultural machinery.[1] If captured, the protesters faced charges of arson, robbery, riot, machine breaking and assault.[3] Those convicted faced imprisonment, transportation, and possibly execution.[3]

"The Swing Riots had many immediate causes. Prof. J. F. C. Harrison believed that they were overwhelmingly the result of the progressive impoverishment and dispossession of the English agricultural workforce over the previous fifty years, leading up to 1830.[1]In parliament Lord Carnarvon had said that the English labourer was reduced to a plight more abject than that of any race in Europe, with their employers no longer able to feed and employ them.[4][5]

"The name "Swing Riots" was derived from Captain Swing, the fictitious name often signed to the threatening letters sent to farmers, magistrates, parsons, and others. He was regarded as the mythical figurehead of the movement.[6] ('Swing' was apparently a reference to the swinging stick of the flail used in hand threshing). The Swing letters were first mentioned by The Times newspaper on 21 October 1830[7]"(Wikipedia article on Swing Riots, accessed 12-2018).