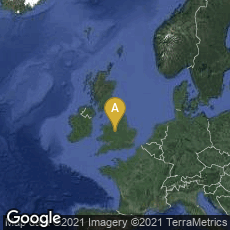 Portrait of John Wilkinson, The Ironmaster by Lemuel Francis Abbott.

In 1774 English industrial and inventor John "Iron-Mad" Wilkinson obtained British patent No. 1063 patent for "A New Method of Casting and Boring Iron Guns or Cannon." Besides its application for weapons, Wilkinson's machine could bore cast iron cylinders such as those used in James Watt's steam engines. It has been called the first machine tool.

"James Watt had tried unsuccessfully for several years to obtain accurately bored cylinders for his steam engines, and was forced to use hammered iron, which was out of round and caused leakage past the piston. In 1774 John Wilkinson invented a boring machine in which the shaft that held the cutting tool extended through the cylinder and was supported on both ends, unlike the cantilevered borers then in use. With this machine he was able to bore the cylinder for Boulton & Watt's first commercial engine, and was given an exclusive contract for the provision of cylinders.[7] Until this era, advancements in drilling and boring practice had lain only within the application field of gun barrels for firearms and cannon; Wilkinson's achievement was a milestone in the gradual development of boring technology, as its fields of application broadened into engines, pumps, and other industrial uses.

Until Wilkinson invented his boring machine the main market for steam engines had been for pumping water out of mines. Watt and Wilkinson envisioned much wider use for them in the driving of machinery in ironworks such as blowing engines, forge hammers and rolling mills. Watt's first rotary engine was installed at Bradley in 1783.