While Brandreth was tried for political issues rather than machine-breaking, Towle and associates were tried for "the attack on Messrs. Heathcoat and Boden's Factory," including the breaking of 55 lace-weaving frames. A broadside summarizing the trial of Brandreth, Turner and Ludlam "For High Treason." 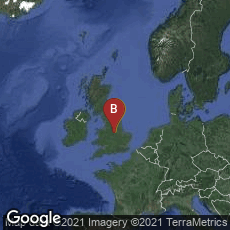 Jeremiah Brandreth, William Turner and Isaac Ludlam, Victims of the Industrial Revolution, Are the Last People Beheaded by Axe in England The notorious image of the head of Jeremiah Brandreth was handcolored in my copy to highlight blood! My copy shows signs of heavy reading by readers with unwashed hands.

A disemployed stocking maker, Brandreth, known as "The Nottingham Captain," was executed for treason on November 7, 1817 for plotting to overthrow the Government of the United Kingdom. He was believed to have been involved in Luddite activities in 1811 when a fellow Luddite was shot dead. Brandreth, William Turner and Isaac Ludlam were tried in Derby in October 1817 for their roles in the Pentrich rising on the night of 9-10- June 1817. Notably Brandreth and colleagues were convicted and executed for political activities that followed Brandreth's known Luddite activities. They were radicalized after being disemployed by industrialization, and may have been incited to their crimes by government agents intent on deterring radical activity. Inevitably such government efforts to deter resistance, rather than efforts to ameliorate the socio-economic struggles, only aggravated the situation.

In my efforts to collect material on the social impact of the Industrial Revolution, including the Luddites, I was able to obtain a copy of the extraordinary Report of the Whole of the Proceedings under the Special Commission held in the County Hall, at Derby in the Month of October, 1817, Including the Trials of Jeremiah Brandreth, Alias John Coke, Alias the Nottingham Captain; William Turner, Isaac Ludlam, the Elder, and George Weightman, for High Treason; with the Speeches of the Counsel and other Interesting Particulars. (Nottingham: Printed by Sutton and Son [1817 or 1818]). This relatively crudely printed small octavo volume includes the famous frontispiece of Brandreth's head being held up by the hangman, after he was beheaded. It was printed in small type of the style most often used by newspapers. My copy was bound with a similarly produced book issued by the same printer about the same time that directly concerned Luddism. That second book began with an exceptionally verbose descriptive title page:

REPORTS  of the TRIAL OF JAMES TOWLE, at Leicester, August 10, 1816, for Shooting at John Asher; of Daniel Diggle, in the Shire Hall, at Nottingham, March 18th, 1817, for Shooting at George Kerry; Also of John Clarke alias LITTLE SAME, Thomas Savidge, Wm. Withers, JOSHUA MITCHELL, WM. TOWLE, John Crowder, John Amos, and JAMES .WATSON, in the Castle, at Leicester, march 31st and April 1st, 1817, for Firing at John Asher, in the Attack on Messrs. Heathcoat and Boden's Factory; at Loughbra; including a Variety of Imteresting Particulars Relative to Samuel Cordwell alias Big Sam, John Disney alias Sheepshead Jack, ____Hudson alias Aaron Daykin, John and Chirstopher Blackborne, and William Burton, who along with James Towle, were the whole of the Men concerned in that Memorable Outrage. Copied, with Considerable additions, from the Nottingham Review of the 4th of April 1817. (Nottingham: Printed by Sutton and Son, [1817]).

Towle was a member of a Luddite gang that carried out an attack on Heathcoat and Boden's lace mill in Loughborough on June 28, 1816. They broke all 55 frames in production and stole some lace fabric. During the attack the Luddites forced at gunpoint a number of guards and workmen to lie on the floor, and one guard, John Asher, was shot and wounded. Towle was recognized during the raid, and was arrested a few days later.

The Preface to this work provided an excellent summary of views critical of Luddism at the time:

"The system of framebreaking, which has so mysteriously existed in the counties of Nottingham, Derby and Leicester, for upwards of seven years, has necessarily attracted not only a local attention, but also the particular notice of government, and the public at large; and of all the outrages committed by these men, the attack and demolition of the machines in the extensive factory of Messrs. Heathcoat and Boden at Loughborough, was by far the most important, whether considered with reference to the damage which was sustained, or the manner of its accomplishment. For a long series of years, the system had remained enveloped in obscurity, notwithstanding all the efforts made both by the magistrates of the district, and by agents sent down by government, for the express purpose of its detection. At length James Towle was brough to trial, and finally executed for a concern in that unparalleled demolition. That he made a confession after the opinion of the twelve Judges was given against him is well known. The confession has been followed by the conviction of eight other individuals concerned in that transaction, and of the conviction and execution of one man, who was also connected with the same parties, for a different offence. The substance of the trials in each of these cases, has appeared in the columns of the Nottingham Review, for which paper the reports were expressly taken; but in consequence of the anxiety of the public to learn further particulars of the late trials at Leicester, the whole of what appeared in the Review, together with some very important additions, is here reprinted; and in order to shew the publication more valuable, the trials of James Towle, at the Nottingham Lent Assizes, 1817, are prefixed. The whole tend to throw more light upon the system of 'Luddism,' than any thing that has yet appeared, and it is hoped that this diabolical practice is now so much exposed, and has received such a death blow, as to prevent the recurrence of any similar outrages. Nottingham, April 8, 1817."

"Following the end of the Napoleonic Wars in 1816, a number of factors combined to drive the country into a severe depression. The increased industrialisation of the country, combined with the demobilisation of the forces, led to mass unemployment. The Corn Laws led to massive increases in the price of bread, while the repeal of income tax meant that the war debt had to be recovered by taxing commodities forcing their prices even higher. In addition, 1817 was unusually wet and cold, producing a very poor harvest.[1]

"The loss of production of war materials had affected engineering companies like the Butterley Company, the price of iron ore had slumped, and the production of coal had fallen by a third. The hosiery trade had also been falling away for about five years.[1]

"There was, in addition, a wider political picture. Since the previous century, there had been calls for parliamentary reform, particularly an end to the rotten boroughs. Subsequently there had been the French Revolution and the Reign of Terror and it appeared that any reform would be accompanied by violence, which Pitt's government set out to pre-empt by increasingly punitive measures.[1]

"Since 1811, there had been minor local uprisings, with stocking frames being smashed in protest at the employment of unskilled workers to produce low-quality stockings. Further afield, there had been food riots in many of the big cities.[1]

"Around the country there were a number of secret revolutionary committees. The one at Nottingham was headed by a needle maker, William Stevens, and its representative from Pentrich was a framework knitter called Thomas Bacon. Bacon was known to have revolutionary views, and was the originator of the Pentrich Hampden Club. [3] Several meetings were held at Pentrich during which Bacon asserted that preparations for an uprising were well advanced, and he had made enquiries at the ironworks and elsewhere about procuring weaponry.[1]

"The decision to take action was made when news arrived of a revolutionary force heading from the north—a hoax fabricated by William Oliver, a paid informer under the Home Office's instruction. The aim was to join them to march on London in support of a bill by Sir Francis Burdett for parliamentary reform.[4]

"Bacon was suspected of machinery breaking and, with a warrant out for his arrest, had gone into hiding. He therefore appointed Jeremiah Brandreth, an unemployed stocking knitter with a wife and two children, to be his deputy. Opinion of Brandreth at the time seems to have been somewhat mixed, but he promised the men that they would go to Nottingham, invading Butterley ironworks on the way, where they would kill the three senior managers and ransack it for weapons. At Nottingham they would receive bread, beef and ale, and a sum of money, and they would take over the barracks. They would then proceed by boat down the River Trent and attack Newark. He told them that there were sixteen thousand ready to join them.[1]

"Among those present were Isaac Ludlam, a bankrupted farmer who owned a small quarry where he had built up a small cache of pikes, and William Turner an ex-soldier. The plan was to assemble at ten o'clock on 8 June, where Ludlam's pikes would be distributed and further weapons would be acquired by requisitioning a man and a gun from each house that they passed.[1] (Wikipedia article on Pentrich rising, accessed 8-2020)

"E. P. Thompson in The Making of the English Working Class sees this rising as a transitional event between the earlier Luddite actions and the later populist Radicalism of 1818–20 and 1830–32."