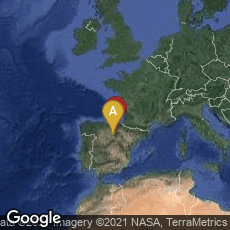 The Missal of Silos, the Oldest Known European Document or Codex Written on Paper Image Source: iconbpg.wordpress.com
Folios 24 (verso and 25 (recto) of the Missal of Silos, written on paper. Music notes are visible on folio 25. Biblioteca de Silos de la Abadia de Santo Domingo
The oldest known document or codex written on paper in Europe is the Missal of Silos.  A quarto comprised of 157 folios, of which folios 1-37 are on paper and the remainder on parchment. It has been described as a breviary-missal or a Liber Mysticus or Breviarum gothicum.

"The missal is "Codex 6" held in the library of the Monastery of Santo Domingo de Silos near Burgos, Spain. It is one of a number of liturgical manuscripts of the Mozarabic rite which have been preserved in the Silos library, despite the suppression of the rite in 1080 by Pope Gregory VII. The codex is named after its current location in Silos, but it was not made at the Silos monastery's scriptorium; it was made at the monastery of Santa María la Real of Nájera. The paper for the missal is believed to have been manufactured in the Islamic world, probably Islamic Spain, even though Nájera was in Christian territory at the time the document was created" (Wikipedia article on Missal of Silos, accessed 9-2020).