Jeremy Norman Collection of Images -&nbspCreative Commons
A fascicule of music. Notice the price in the lower margin: 4s. Image Source: archive.org
Title page of the Supplement to the Musical Library (1834) 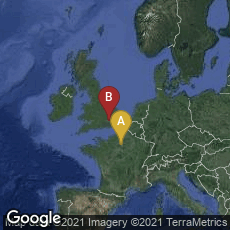 Image Source: gallica.bnf.fr
The printing of music from metal type challenged printers since the invention of printing. In 1834 Belgian musicologist, composer, and teacher François-Joseph Fétis issued a specimen of the innovative musical typography invented by printer and bookseller Eugène Duverger. The specimen, of which a copy has been digitized by the BnF, was entitled Specimen des caractères de musique gravés, fondus, composés et stéreotypés par les procédés de E. Duverger. Précéde d'une notice sur la typographie musicale par M. Fétis. Though the purpose of the specimen was undoubtedly to promote M. Duverger's process, which represented a substantial improvement in the quality of music printing, the text of the specimen made the distinct point that the process itself would be kept secret.

Around the time that Duverger was working to improve musical typography in Paris, the London industrial printer William Clowes seems to have become interested in music printing and publishing in 1823, the same year that Clowes first installed steam-powered printing machines built by Augustus Applegath and Edward Cowper. That year Clowes also began printing and publishing the music magazine,The Harmonicon, a Journal of Music, edited by William Scrope Ayrton. In addition to vocal and instrumental music, this magazine contained essays, criticisms, biographies, etc. My copy of the first volume of the journal (1823) collected the essays in one volume and the music in a separate volume. Whether Clowes actually printed the first volume of The Harmonicon on a steam-powered press is unknown. The magazine never achieved sales of more than about 1500 copies, but it appears that Clowes continued with the periodical for more than a decade, probably because of the challenge of printing music.

Where Duverger's secret music typography came into play in Clowes's production was in The Musical Library, a publishing project in which Clowes engaged with publisher Charles Knight to offer high quality music at very competitive prices after Clowes discontinued publication of The Harmonicon. As The Harmonicon gradually lost popularity and was shut down, and Clowes and Knight were enjoying unparalleled success with the new Penny Magazine, Clowes and Knight offered The Musical Library in weekly numbers at fourpence each, and monthly parts priced two shillings. The weekly musical numbers, typically of eight pages and consisting exclusively of either vocal or instrumental music, were available for 4d or in a monthly set (sometimes five numbers a month) for 18d. They also issued a 12-page monthly literary supplement for 6d, or attached to a complete month's music for 24d (2s.). In the first Monthly Supplement to The Musical Library the editor of the magazine, opera manager and music critic William Ayrton, who had previously edited The Harmonicon, wrote:

"The principle which has been so extensively applied in literature and the graphic arts, of producing works at the lowest possible point of cheapness, without any abandonment of the qualities by which the popular knowledge and taste may be advanced, has yet a wide field for its employment in the department of Music. This most delightful of the arts was never so generally cultivated in this country as at the present moment. The pianoforte, especially, contributes to the recreation and enjoyment of thousands of families throughout the United Kingdom, and in our colonial possessions, and yet the publications by which this taste ought to be kept up and improved are sold at a price which, in many cases, amounts to a prohibition.

"The design of the 'Musical Library' is to afford the same advantage to amateurs in music that the lovers of literature are deriving from the cheap publications for the advancement of real knowledge that are now distributed through every part of the Empire, and placed within the reach of persons of every condition."

Following that Ayrton continued with a survey "On the Various Processes Applied to Printing Music," in which he explained the history of the technical efforts to print music, ending with the implementation in The Musical Library of the secret new method of musical typography developed M. Duverger. Ayrton wrote:

Ayrton's statement leaves open whether Duverger's secret process was ever actually applied in the production of the two volumes of The Musical Library; the printing of the magazine during the two years of its existence was always considered very high quality. It remains one of the more difficult to find publications by Charles Knight, suggesting that it was never a major commercial success.

Regarding The Harmonicon and The Musical Library see Leanne Langley, "The Life and Death of The Harmonicon: An Analysis," Royal Musical Association Research Chronicle, 22 (1989) 137-163.