Jeremy Norman Collection of Images -&nbspCreative Commons
Iron handpresses illustrated in this folding plate included the elaborately ornamented American Columbian press (left), which presumably would not have been common in France.

Jeremy Norman Collection of Images -&nbspCreative Commons
This folding plate in Frey's book included an image of the Applegath & Cowper double cylinder perfecting machine. This model may have been designed to be turned by human power using a hand-crank.

Jeremy Norman Collection of Images -&nbspCreative Commons
This folding plate includes an image of the hand-crank driven Nay-peer machine invented by Hansard, iron hand-presses including the Stanhope, as compared to wooden hand-presses which were still in use by certain printers. Image Source: books.google.com
Title page of the second part of the 1857 edition containing the comments upon typesetting machines. 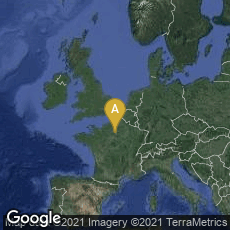 In 1835 A. Frey issued as part of the Encyclopédique de Roret series published in Paris, Manuel Nouveau de typographie. Imprimerie, contenant les principes théoriques et pratiques de l'imprimeur-typographe. This work, published in two small format volumes like the rest of the extensive and diverse series, was written in the form of an encyclopedia with a series of densely typeset articles arranged alphabetically. Under "Presses" Frey started with the traditional presses made of wood, then he discussed iron handpresses beginning with the Stanhope press, and the various modifications that had been made of that press by various manufacturers. In his discussion of Presses mécaniques on II, pp. 365-371, he summarized the development and application of printing machines in France, concluding that these presses were excellent for high volume work— especially newspapers and magazines—but that they could not equal the quality of handpress for "fine printing." This was the first comprehensive review of printing machines published in a French book.

In the second edition of the same work revised, corrected, and augmented by E. Bouchez, "Correcteur à l'Imprimerie J. Claye", Bouchez brought the discussion of printing machines up to date on II, 331-340. In his exposition on typesetting on II, 433-438 Boucher reviewed typesetting and type-distributing machines, mentioning that "three curious specimens of this type" were exhibited at the Exposition universelle of 1855. These were the Sørensen system, the system of Delcambre the younger, and the system of Delcambre the elder that was slightly different. After summarizing all of these devices Boucher concluded that an expert human compositor was superior to all of them. This was the first discussion of typesetting and type-distributing machines published in any general treatise on typography.