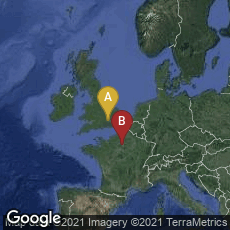 Image Source: books.google.com
In 1840 Etienne Robert Gaubert, an English mathematician then living in England, received British Patent Specification No. 8427 for Certain Improvements in Machinery or Apparatus for Distributing Types or other Typographical Characters into Proper Receptacles, and Placing the Same in Order for Setting up, after being Used in Printing." Gaubert was the first to patent a system of type distribution. His system employed types that were nicked in specific plates unique to each character. These nicks could be felt by and identified by his sorting system which operated by gravity. How much his system was used is unknown; it is known primarily from his patent, and from a description of the machine published  by Alphonse Alkan in Annales de la typographie française et étrangère 30 (1840) 82-87 entitled "Machine propre à la composition et à la décomposition des caracterères d'imprimerie." Gaubert also published a single pamphlet on the machine: Rénovation de l'Imprimerie. Nouvelle puissance de la Mécanique. Notice sur le Gérotype ou machine à distribuer et à composer en typograhie, Rapport à l'académie des sciences le 5 décembre 1842 (Paris: By the inventor, rue Servandoni, 16, 1843). When I wrote this entry in December 2020 I was unable to locate a digital copy of this pamphlet; it appeared however in several bibliographies.