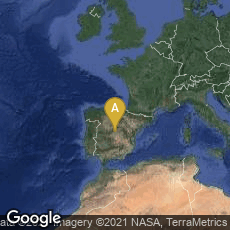 First page of the reproduction of the Providence Public Library copy of Paredes' Institucion. Neither of the two exant copies have a title page.
Around 1680 compositor Alonso Víctor de Paredes typeset and printed at Madrid, but did not formally publish, his Institucion, y origen del arte de la imprenta, y reglas generales par los componedores. Assuming that Paredes printed the two slightly different and relatively crudely printed copies of his text by 1680, they predated Joseph Moxon's Mechanick Exercises by four years. However, since Paredes's text appears never to have been formally published, it had little influence upon printers at the time. Only two copies are known, neither of which have title pages. One, that formerly belonged to printer and type historian Daniel Updike, is preserved in the Providence Public Library and the other is at the University of Valencia, Spain.

In 2018 a definitive edition of Paredes' text was edited and translated by Pablo Alvarez, and published by The Legacy Press of Ann Arbor, Michigan: Alonso Victor de Paredes' Institution, and Origin of the Art of Printing, and General Rules for Compositors [Madrid: ca. 1680]. The edition included color reproductions of each page of the two known copies on facing pages.