Image Source: www.dailymail.co.uk
Another view of the Hansen Writing Ball with the writing ball folded back. 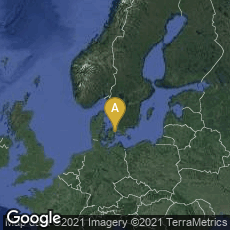 Image Source: www.dailymail.co.uk
Hansen Writing ball in its original wooden case.
In 1865 Danish inventor, minister, and principal at the Royal Institute for the Deaf Rasmus Mailling-Hansen invented the Hansen Writing Ball, the first commercially produced typewriter. Malling-Hansen patented the typewriter and put it into production in 1870. By 1878 he made the refinements to create the machine by which it is primarily known. The machine was always hand-crafted and never mass-produced so only 180 were ever made, of which only six have survived.


"The Hansen ball was a combination of unusual design and ergonomic innovations: its distinctive feature was an arrangement of 52 keys on a large brass hemisphere, causing the machine to resemble an oversized pincushion. From the book Hvem er Skrivekuglens Opfinder, written by Malling-Hansen's daughter Johanne Agerskov, we know how Malling-Hansen made experiments with a model of his writing ball made out of porcelain. He tried out different placements of the letters on the keys, to work out the placement that led to the quickest writing speed. He ended up placing the most frequently used letters to be touched by the fastest writing fingers, and also placed most of the vowels to the left and the consonants to the right. This, together with the short pistons which went directly through the ball, made the writing speed of the writing ball very fast.

"Like most of the early 19th-century typewriters, it did not allow the paper to be seen as it passed through the device.

"The first models typed on a paper attached to a cylinder, which could be made to move both rotationally with the cylinder and longitudinally along the cylinder, enabling the user to format and space the letters manually. The user would attach a piece of white paper and a sheet of coloring paper onto the cylinder by way of several clips. These models also included an electro-magnet for the Ball which controlled both the typewriter's movement and manipulation, thus making Malling-Hansen's machine the first electric typewriter. This electro-magnet was powered by a 10 or 12-cell battery, and controlled a mechanical escapement in the typewriter's clockwork, moving the carriage a fixed amount each time one of the pistons was depressed.[1]

"Malling-Hansen made several improvements on his invention throughout the 1870s and 1880s, and in 1874 he patented the next model, and now the cylinder was replaced by a flat mechanical paper-frame. The electromagnetic battery was still used to move the paper along as the Ball typed upon it, and the design led to a lower possibility for error. Malling-Hansen improved further on his design, and created a semi-cylindrical frame to hold one sheet of paper. This best known model was first patented in 1875, and now the battery was replaced by a mechanical escapement. All these improvements made for a simpler and more compact writing apparatus" (Wikipedia article on Hansen Writing Ball, accessed 2-2021).