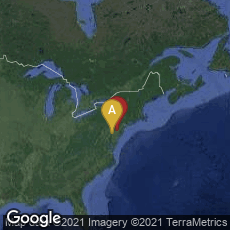 Key Events in the Development of the First General Purpose Electronic Digital Computer, the ENIAC In June 1941 J. Presper Eckert and John Mauchly met at the Moore School of Electrical Engineering, now part of the University of Pennsylvania School of Engineering and Applied Science, and began discussions on electronic computing. In August 1942 Mauchly wrote a privately circulated confidential memorandum on “The Use of High Speed Vacuum Tube Devices for Calculating.” This was after he had visited John Atanasoff in Iowa.

With the goal of speeding up the calculation of artillery firing tables, on April 8, 1943  Eckert and Mauchly submitted a proposal to the Ballistic Research Laboratory at Aberdeen Proving Ground, near Aberdeen, Maryland. Their proposal was entitled Report on an Electronic Difference Analyzer. By calling their proposed device an electronic difference analyzer Eckert and Mauchly tried to make the distinction between the electromechanical analog differential analyzer that the United States Army was using and the new electronic digital machine that would be developed. The proposal was submitted to army ordnance in May.

When the first contracts were signed between the U. S. Army and the Moore School, the name of the machine was changed to “Electronic Numerical Integrator.” Because Mauchly stressed that the machine could be used for more general problems, the device was called an “Electronic Numerical Integrator and Computer (ENIAC).” Eckert was appointed laboratory supervisor and chief engineer on the project. Mauchly, along with Eckert, was put in charge of engineering and testing. On May 31, 1943 construction of the ENIAC started at the Moore School. The actual contract between the Moore School and the army did not go into effect until July 1. For security reasons, the understandable rumor that the project was a “white elephant” was promoted rather than denied.

In July 1944 Eckert had two accumulators of the ENIAC operational.

About May 1945 the ENIAC was completed and tested at the Moore School. With eighteen thousand vacuum tubes and weighing thirty tons, the ENIAC was about one thousand times faster than the Harvard Mark I, and 10,000 times the speed of a human computer doing a calculation. Programming the ENIAC was accomplished by time-consuming plugging of patch cords from buses to panels for each individual problem.

On November 30, 1945 Eckert, Mauchly, John Brainerd, and Herman Goldstine issued the first confidential published report on the completed ENIAC, discussing how it operated and the methods by which it was programmed: Description of the ENIAC and Comments on Electronic Digital Computing Machines.The report was published under the auspices of theApplied Mathematics Panel, National Defense Research Committee. In the spring of 1945 the National Defense Research Committee (NDRC) was becoming very interested in electronic computers, and mathematician Warren Weaver, head of the NDRC’s Applied Mathematics Panel, asked John von Neumann to write a report on the Moore School’s ENIAC and EDVAC projects. Von Neumann was unable to fulfill Weaver’s request, so Weaver assigned the task to John Grist Brainerd, director of the ENIAC project. Brainerd was eager to have the report appear under his name, but Eckert and Mauchly objected, since Brainerd was largely unfamiliar with the scientific aspects of the project. After some internal dispute, it was agreed that the report’s authors should be listed on the title as Eckert, Mauchly, Goldstine, and Brainerd. The report was issued with a “Restricted” classification and 91 copies were distributed to military, Office of Scientific Research and Development and NDRC personnel, as indicated by the distribution list on the inside front cover.

Although confidential progress reports on ENIAC had been issued in 1944, this report of November 30, 1945, was the first account of the completed machine. As stated in the title, the report contained a detailed description of ENIAC, the world’s first large-scale electronic general-purpose digital computer, as well as chapters on the need for high-speed computing machines, the advantages of electronic digital machines, design principles for high-speed computing machines, and reliability and checking. At the end are three appendices discussing ENIAC’s arithmetic operations, programming methods, and general construction data. This may have been the earliest published report on how the first electronic digital computer was programmed. Even though the ENIAC was not a stored-program computer its design and mode of operation involved numerous programming firsts The report also provided information on the planned stored-program EDVAC, which was then in an early design stage. For the three years between May 1945 and June 1948, ENIAC remained the only functioning electronic, general purpose digital computer in the world until the short-lived Manchester “Baby” prototype became operational in 1948.

On February 14, 1946 the ENIAC was publicly unveiled in Philadelphia.

On July 15, 1946 Eckert lectured at the Moore School on “A preview of a digital computing machine.” He proposed replacing the three different kinds of memory used in the ENIAC (flip-flops in accumulators, function tables [read-only memory] and interconnecting cables with switches) with a single erasable high-speed memory—the mercury delay-line memory that he invented for this purpose. This was a key step in the development of a stored-program computer. In 1947 the ENIAC was converted into an elementary stored-program computer by the use of function tables.

At 11:45 p.m. on October 2, 1955, after roughly ten years of continuous service, power to the ENIAC was disconnected for the last time at the Aberdeen Proving Ground, and the machine was retired. It was estimated that this single machine did more computation during the ten years of its operation than the entire human race had done up till the time of its invention.