Flow chart of the dictionary look-up procedures involved in the mechanical translation process to illustrate its complexity. Hutchinson reproduced the chart from Sheridan, "Research in language translation on the IBM type 701," IBM Technical Newsletter 9 (1955) 5-24. 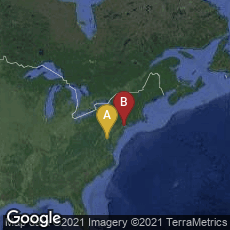 Hurd, Dostert and Watson at the demonstration, reproduced from John Hutchins paper.

On January 7, 1954 the first public demonstration of a Russian-English machine translation system occurred in New York—a collaboration between IBM and Georgetown University. Brief statements about politics, law, mathematics, chemistry, metallurgy, communications and military affairs were submitted in Russian by Léon Dostert and linguists of the Georgetown University Institute of Languages and Linguistics, and within a within a few seconds a computer translated the sentences into English. This project, which began in 1951, was also probably the first non-numerical application of a digital computer. Programming and the demonstration was done on an IBM 701, the first stored program digital computer that IBM put into production. IBM began producing the machine in December 1952.

Although the demonstration was only a small-scale experiment of just 250 words and six grammar rules, it raised expectations, that later proved quite unrealistic, of automatic systems capable of high quality translation in the near future. The day after the demonstration the front pages of The New York Times and other major American newspapers carried reports of the first public demonstration of a computer for translating languages. Reports were syndicated in many provincial newspapers, and in the following months articles about it appeared in popular magazines. Some of the participants in the project claimed that within three of five years machine translation would be a solved problem. This encouraged governments to invest in computational linguistics.

In December 2013 IBM's January 8, 1954 press release concerning the demonstration was available from IBM's archive at this link.