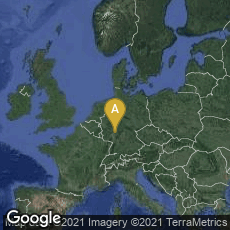 Johann Philipp Reis, the True Inventor of the Telephone? Johann Philipp Reis, a German schoolteacher and physicist, announced his invention of the telephone in a lecture before the Physical Society of Frankfurt. He published "Ueber Telephonie durch den galvanischen Strom" in Jahres-Bericht des physikalischen Vereins zu Frankfurt am Main fur des Rechungshahr 1860-1861 (1861).

Reis's transmitter worked by alternatively making and breaking connection with a battery, while his receiver was designed to operate on the principle of magnetorestriction -- the property of ferromagnetic material such as iron to change shape on applicate of a magnetic field. Neither of these principles was adequate for constructing a successful speech-transmitting telephone, which requires continous contact and an undulating current; however,

"If the sound entering a Reis transmitter is not too strong, contact between the metal point and the metal strip will not be broken. Instead, the pressure of the former on the latter will fluctuate with the sound causing fluctuations in the electrical resistance and therefore in the current. Similarly the receiver will respond to continuously fluctuating as well as to intermittent currents (but not by magnetorestrction). The sensitivity, however, is extremely low. . . ." (Encyclopedia Brittanica, 15th edition.)

This may explain the partial but real success of Reis's telephone in transmitting intelligible speech.

Between 1858 and 1863 Reis constructed three different models of his telephone, the third and best-known of which was demonstrated to scientific societies throughout Europe and America. One of those who saw Reis's machine was Alexander Graham Bell, who was shown Reis's telephone at the Smithsonian Institution in March 1875, and who might have seen an earlier model demonstrated in Edinburgh as early as 1862.

Reis had no interest in profiting from his telephone, freely giving out information on it to anyone who asked, and selling models of it at a reasonable price. Reis died of tuberculosis in 1874 at the early age of 40.