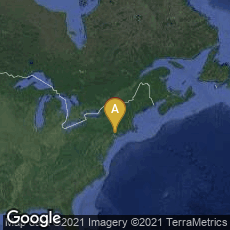 "The idea for DRAM came to Dennard in 1966, in an epiphany on his living room couch in Westchester County, New York, as he enjoyed the waning daylight over the Croton River Gorge. That morning, he had attended an all-day meeting of IBM researchers, where they shared projects with one another in an attempt to stir ideas and foster collaboration. At the time, Dennard was working on metal-oxide semiconductor (MOS) transistor memories for computers. Earlier in the day, he had listened to the group trying to improve magnetic core memory. Something about his own work and what he saw at the review troubled Dennard. The magnetic memory being developed by his competing researchers had drawbacks, but it was extremely simple. His MOS project had promise, on the other hand, but it was quite complicated, using six transistors for each bit of information.

“ 'I thought, ‘What could I do that would be really simple,’' Dennard recalled. There on his couch, he thought through the characteristics of MOS technology—it was capable of building capacitors, and storing a charge or no charge on the capacitor could represent the 1 and 0 of a bit of information. A transistor could control writing the charge to the capacitor. The more Dennard thought, the more he knew he could make a simple memory out of this.

“ 'I called my boss that night around 10 p.m.,' Dennard said. 'It’s a rare event that I’d call him. He listened to me, then suggested we talk about it tomorrow. I joke that he basically told me to take two aspirin and call him in the morning.'

Dennard still had to work on the six-transistor memory, so he worked on his new idea in his spare time, eventually figuring out the subtleties of writing a charge to the capacitor by way of an access transistor, and then reading it back through the same transistor. In 1967, Dennard and IBM filed a patent application for his single-transistor dynamic random access memory, or DRAM, and the patent was issued in 1968.

"In 1970, Intel ® built a very successful 1-kilobit DRAM chip using a three-transistor cell design, while several manufacturers produced 4-kilobit chips using Dennard’s single-transistor cell by the mid-1970s. Wave after wave of innovation followed, driven by Moore’s Law and scaling principles pioneered by Dennard and coworkers at IBM in the early 1970s. This progress continued through the years, resulting in the DRAM chips of today with capacities of up to 4,000,000,000 bits. Dennard said he could not foresee how important DRAM would become when he invented it: 'I knew it was going to be a big thing, but I didn’t know it would grow to have the wide impact it has today' " (https://www.ibm.com/ibm/history/ibm100/us/en/icons/dram/  accessed 9-2020).