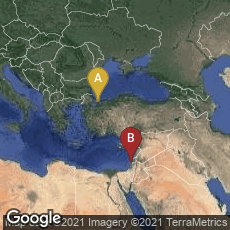 Contantine Orders Fifty Luxurious Bibles for the Churches of Constantinople Head from a statue of Constantine I in the Capitoline Museum, Rome.

Because of the remarkable increase in the number of Christians after the conversion of Constantine's court to Christianity, Constantine's new capital city of Constantinople contained many churches which needed Bibles for divine service. In the twenty-first year of Constantine's reign, 326-327, Constantine wrote to Eusebius in Caesarea requesting him to furnish fifty copies of the Bible, well written and easy to read. Funds for their production were to be provided by the rationalis (finance manager) of the diocese of Oriens (Dioecesis Orientis, Ἐῴα Διοίκησις), and arrangements were made for their transport by official channels. In his Life of Constantine, Book Four, Chapter XXXVI, Eusebius quotes a letter from Constantine in Greek expressing this desire, one translation of which follows:

"Chapter XXXVI.—Constantine’s Letter to Eusebius on the Preparation of Copies of the Holy Scriptures.

“ 'It happens, through the favoring providence of God our Saviour, that great numbers have united themselves to the most holy church in the city which is called by my name. It seems, therefore, highly requisite, since that city is rapidly advancing in prosperity in all other respects, that the number of churches should also be increased. Do you, therefore, receive with all readiness my determination on this behalf. I have thought it expedient to instruct your Prudence to order fifty copies of the sacred Scriptures, the provision and use of which you know to be most needful for the instruction of the Church, to be written on prepared parchment in a legible manner, and in a convenient, portable form, by professional transcribers thoroughly practiced in their art. The catholicus of the diocese has also received instructions by letter from our Clemency to be careful to furnish all things necessary for the preparation of such copies; and it will be for you to take special care that they be completed with as little delay as possible. You have authority also, in virtue of this letter, to use two of the public carriages for their conveyance, by which arrangement the copies when fairly written will most easily be forwarded for my personal inspection; and one of the deacons of your church may be intrusted with this service, who, on his arrival here, shall experience my liberality. God preserve you, beloved brother!' ”

Eusebius followed this with Book 4, Chapter 37: "How the Copies were Provided," the pertinent sentence of which is quoted from the same translation:

"Such were the emperor's commands, which were followed by the immediate execution of the work itself, which we sent him in magnificent and elaborately bound volumes of a threefold and fourfold form."

The final phrase, εν πολυτελως ησκημενοις τευχεσι τρισσα και τετρασσα διαπεμψαντων ημων, has long intrigued bible scholars and book historians as a possible clue to the format of the bibles supplied. According to the Wikipedia article on "Fifty Bibles of Constantine," (accessed 12-29-2013), the phrase has been interpretted several different ways:

Version 4 was used by the discoverer of the Codex Sinaiticus, Constantin von Tischendorf, and others, including Kirsopp Lake in his paper, "The Sinaitic and Vatican Manuscripts and the Copies Sent by Eusebius to Constantine" to argue that the Codex Sinaiticus and also the Codex Vaticanus, which were written in a four and three narrow column format respectively, were among the fifty bibles supplied by Eusebius to Constantine. However, Lake admitted that the phrase was ambiguous and could just as well have meant the same as version 5, "three or four copies at a time." Version 5 was the interpretation accepted by Timothy Barnes in his study, Constantine and Eusebius (1981) 124.