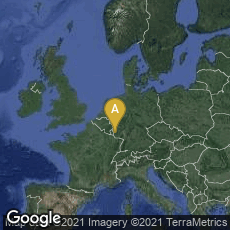 The Golden Gospels of Henry VIII (Morgan MS M.23) was possibly created for the coronation of Otto III in 983. It was later in the library of Henry VIII of England (No. 952 in the 1542 Inventory of Henry VIII's Upper Library at Winchester Palace.). According to one tradition it was presented to Henry by Pope Leo X (Giovanni Lorenzo di Medici) in 1521 when he conferred upon Henry the title of "Defender of the Faith." In the second half of the sixteenth century the arms of England and an inscription addressed to a prince were added on the verso of the first leaf. It was later in the the library of Duke of Hamilton, and was acquired by J. Pierpont Morgan in the Theodore Irwin collection purchased in 1900.

In "The Morgan Golden Gospels: The Date and Origin of the Manuscript," in Miner (ed) Studies in Art and Literature for Belle Da Costa Greene (1954) 266-79, E. A. Lowe showed through paleographical comparison that it was written and decorated in the Benedictine Abbey of St. Maximin at Trier, Germany during the abbacy of Archbishop Egbert, by at least 16 different scribes.

The manuscript is extraordinary for several reasons:

1. It was written on vellum painted various shades of purple using dye made from berries. The leaves vary in color from mauve to slate blue.

2. It was written in an uncial hand in burnished gold letters. The particular special type of uncial used was "heretofore unrecorded" until this manuscript was studied by E. A. Lowe.

3. It was written by at least sixteen different scribes. (When I wrote this entry in March 2014, this was the largest number of different scribes that I had heard of being identified with the writing of a medieval manuscript.)

4. According to E. A. Lowe, it is "one of the finest, if not the finest purple manuscript in existence."

"The practice of writing on purple membranes goes back at least to classical times, and was not unknown among early Christians even when the Church was strugglinig for existence. This form of ostentation, however, was frowned upon by the Fathers. In his oft-quoted preface to Job, St. Jerome (d. 420) takes occasion to remark: 'Let those who want them have ancient books or books written in gold or silver on purple parchment or in what is commonly called uncial letters—written burdens (I call them) rather than books.' No extant purple manuscript of the Bible written in gold goes back to the time of these Fathers. If we may judge by what remains of such Latin books, the Gospels and the Psalater were the favorites. The oldest of them date from the late fifth and sixth centuries and they are all in letters of silver, gold having been reserved for the N omina scara (dominus, deus, Iesus, etc.) and special passages, titles or opening lines. The Latin manuscripts are devoid of decorative initials and lack all prefatory matter and capitularies; the text is Old-Latin, i.e. pre-Jerome. They are so few in number that I enumerate them here:

"Greek purple manuscripts were doubtless models for our Latin ones. Only six or seven have survived. They are all, with one exception, in silver letters, and none is apparently older than the sixth century. They are: the Vienna Genesis, the Cotton Genesis, the Codex Rossanensis in the Bibliotheca Arcivescovile at Rossano, the Codex Sinopensis at Paris, written entirely in gold, the Codex Beratinus at Berat in Albania, the Codex Purpureus, with its surviving forty-five folios scattered, thirty-three being in the convent of St. John at Patmos, six in the Vatican, four in the British Museum and two at Vienna.

"The custom of producing purple manuscripts apparently died out in the West during the dark centuries of the early Middle Ages, but we know that it was honored in Northumbria in the late seventh century. It flourished agin in the Corolingian period, as is attested by several surviving manuscripts de luxe. Here and there we encounter magnificent books written on ordinary parchment whose beauty was enhanced by the addition of a few purple leaves. It is important to note that in the oldest purple manuscripts as well as in Carolingian codices purpurei the membranes are dyed, whereas in manuscripts of the Ottonian period the urple leaves, apart from the few imported from Byzantium, are painted, as is the case in our Morgan manuscript.

"The writing of a codex aureus purpureus was no ordinary affair in a scriptorium. It not only involved costly material, it also demanded special skill. For writing with the unusual sticky medium which could take the gold leaf was difficult even for the best of scribes. it stands to reason that such sumptuous manuscripts were intended for special occaions, and we know from ancient sources that they were objects of pride. It is theefore surprising to find no record of our splendid manuscript before the beginning of the last century. There is not a single contemporary marginal note or later entry which could throw any light on the vicissitudes of the volume during the entire period of the Middle Ages" (Lowe, op. cit., 266-68).

The Rossano Gospels, One of the Oldest Surviving Illuminated Manuscripts of the New Testament
The Vienna Genesis: the Oldest, Well-Preserved Illustrated Biblical Codex

The Cotton Genesis, Fragments of a Fifth or Sixth Century Codex

The Rossano Gospels, One of the Oldest Surviving Illuminated Manuscripts of the New Testament
The Codex Purpureus Beratinus

The Rossano Gospels, One of the Oldest Surviving Illuminated Manuscripts of the New Testament
The Limited Interest in Greek and Limited Availability of Greek Texts in Western Europe during the Late Middle Ages
The Codex Purpureus Beratinus