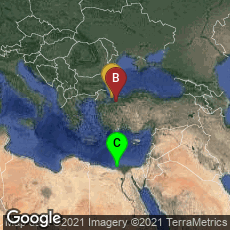 The Imperial Library of Constantinople, About Which Remarkably Little is Known Presumed bust of the founder of the Imperial Library of Constantinople, emperor Constantius II (317 - 361), son and successor of Constantine I.

About 357 CE the Byzantine emperor Constantius II, son of Constantine I, aware of the deterioration of early texts written on papyrus rolls, began the formation of the Imperial Library of Constantinople by having the Judeo-Christian scriptures copied from papyrus onto the more permanent medium of parchment or vellum. The person in charge of the library under Constantius II is thought to have been Themestios, who directed a team of scribes and librarians that copied the texts on papyrus rolls onto parchment or papyrus codices. It is probable that this library preserved selected texts that survived the burning of the Library of Alexandria, though the historical accounts of the destruction of the Alexandrian Library are contradictory.

Some authorities have conjectured that the Imperial Library of Constantinople might have eventually grown to about 100,000 manuscript volumes, presumably bookrolls and codices; however, so little is actually known about the Imperial Library that it is impossible to estimate how many volumes it might have housed at any time. It is also possible that the conjectured number as high as 100,000 volumes is more reflective of the quantity of information preserved in modern times than the much more limited production and survival of information in the ancient world in general and Byzantium in particular.

"The first indication of an imperial library in Constantinople comes from Themistius, who in an oration delivered in 357 congratulates the emperor on having undertaken to reconstitute and collect in Constantinople the literary heritage of ancient hellenism by having the works of ancient authors, including minor ones, transcribed by a cadre of professional scribes working at imperial expense (Or.4.59-61). Such a scriptorium and such a task presuppose a library, and the library, if not established by Constantius, owed its character and early development to him. Subsequently, according to Zosimus (Hist. nov. 3.11.3) the emperor Julian (361-63) lent his patronage to the library and enlarged its holdings with his own. The Theodosian code (14.9.2) informs us that in 372 the emperor Valens ordered the employment of seven copyists (antiquarii)--four for Greek and three for Latin texts--and some assistants to maintain and repair the books of the imperial library. Thus we know that the library housed both Greek and Latin texts, but not necessarily in separate libraries, as was the practice in Rome" (Gamble, Books and Readers in the Early Church. A History of Early Christian Texts [1995] 168).

"The twelfth-century epitomist Joannes Zonaras relays an old and possibly accurate estimate that in 475 when the [Imperial] library [of Constantinople] was damaged by fire it contained 120,000 volumes, which suggests that the library grew steadily during the first century after its founding" (Gamble, op.cit. 169).

Remarkably little is known concerning any Byzantine libraries, but it has been assumed that the Imperial Library in Constantinople preserved many of the Greek texts that have come down to us, and it has been suggested by some scholars that in the eighth century Charlemagne was able to obtain copies of classical texts from the Imperial Library, though it is much more likely that books at Aachen were copied from those in monastery libraries under Charlemagne's rule. We may never know for certain what connections the library in Aachen might have made with the Imperial Library in Constantinople as only a handful of actual codices that can definitely be traced to the Imperial Library have survived, and those are in Europe rather than in Turkey. In May 2014 the best paper I could find on Byzantine libraries was Nigel G. Wilson, "The Libraries of the Byzantine World," Greek, Roman and Byzantine Studies 8 (1967) 53-80. From this I quote passages:

"To discuss so large a subject as the libraries of the Byzantine world within the limits of a single paper may seem unduly ambitious. The chronological and geographical range of the topic is enormous. But despite the great advance of Byzantine studies in this century the amount of primary source material on this subject remains modest, one might well say disappointing, since the references are normally brief and difficult to interpret with any confidence. A short but reasonably comprehensive survey is not out of the question, especially if the scope of the essay is restricted in two ways. Unfortunately a chronological limitation is imposed by the nature of the sources: comparatively little is known of the earlier periods of the empire, and in consequence nearly all my material relates to the ninth century or later. The second restriction is that my concern will be the libraries of institutions, mostly monasteries, rather than those of private individuals; there were of course collectors who had the means to build up substantial private libraries, but the cost of collecting on this scale ensured that it was a hobby reserved for a few rich men, and with the one notable exception of Arethas the details of their activities cannot be traced." (Wilson, op. cit., p. 53)

Among the many historical problems regarding the Imperial Library of Constantinople, we have no way of estimating how many volumes it might have contained:

"There is no means of telling how many books the emperor's library contained. Even if the mediaeval sources gave any figures they would have to be treated with reserve, as numerals are singularly subject to corruption in manuscript tradition, and in addition it is a well-known fact that the majority of people find it impossible to give accurate estimates of large numbers. Obviously it was a large library by the standards of the day, since it had to satisfy the demands of the imperial family and probably the civil service officials employed in the palace." (Wilson, op. cit., p. 55)

Another aspect was that the Imperial Library is known to have been significantly destroyed in the Fourth Crusade of 1204 when Norman crusaders, attempting to form a Latin Empire, sacked Constantinople, almost completely destroying the city. They burned the Imperial Library, probably nearly destroying its collections. The 1204 sack of Constantinople has been described as one of the most profitable and disgraceful sacks of a city in history. It is believed that crusaders may have sold some rare Byzantine manuscripts to Italian buyers.

Of books known to have been once in the Imperial Library of Constantinople, only a handful have survived:

"It appears that Andronicus III gave a copy of one of Galen's works to Robert I of Anjou, which was used as a basis for a Latin translation by Niccolò of Reggio (floruit ca. 1308-45); the evidence for this is that a manuscript of Niccolò's version (Paris, Nouv.acq.lat. 1365) has a colophon dated 1336 which mentions the gift. As certain works ascribed to Galen survive only in the Latin versions by Niccolò, it is tempting to speculate that these too reached the West through a gift of the emperor. Finally we can point to a small gift made to a collector of the Renaissance, Giovanni Aurispa, who ways that the emperor gave him copies of Xenophon's De re equestri and Procopius' Wars; this took place about 1420.

"It is also a reasonable inference that a few luxuriously produced volumes with portraits of individual emperors were intended for their use and became part of the imperial library. Examples are Parisinus gr. 510, a ninth century copy of Gregory of Nazianzus, and two books prepared for Basil II, the so-called Monologion (MS Vat. gr. 1613) and the Psalter (MS Ven.gr. 17). But these are standard texts and tell us nothing significant about the library. It is good that such masterpieces of illumination and calligraphy have survived, but if they had not, it would not have been rash to assume that the emperors had fine copies of such works. . . .

The d'Orville Euclid, the Oldest Dated Manuscript of a Classical Greek Author
The Clarke Plato, the Oldest Surviving Manuscript of Plato's Tetralogies
The Earliest Codex Preserving Ancient Greek Music Theory
The Limitations of Book Production and Book Trade in the Byzantine Empire
Pollux's Onomasticon, the Oldest Specimen of Encylopedism Surviving from Antiquity

Venetus A, the Most Famous, and Most Significant Manuscript of the Iliad
How Greek Texts Moved from Constantinople to Italy: The Largest and Finest Collection of Greek Texts before Bessarion's
The Limited Interest in Greek and Limited Availability of Greek Texts in Western Europe during the Late Middle Ages