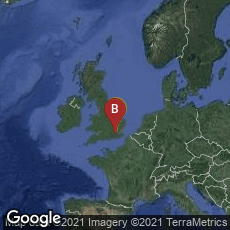 Image Source: www.geograph.org.uk
"Former silk mill, Streatham High Road
A London rarity. A former silk mill, complete with cupola, built c1820 by "a manufacturer, Stephen Wilson, in an attempt to convert the Spitalfields silk-weaving industry to the factory system." The mill's buildings were subsumed into P.B. Cow's India Rubber Works (as in Cow Gum) early in the C20th. Much of the site was demolished in 1989 prior to conversion to a supermarket (by David Gibson Architects). Grade II listed. It is within the Streatham Common Conservation Area.
Now Sainsbury's."

In 2016 I also acquired a copy of the English patent on the Jacquard loom granted in 1821 to Stephen Wilson, a silk merchant from Hoxton in Middlesex, England. The specification No. 4543 was granted for "Certain Improvements in Machinery for Weaving Figured Goods." As one might expect, nowhere in the patent is any mention of Jacquard. The 1821 patent describes the loom and its operation in considerable detail, and the large folding chart in the patent, which contains 16 detailed images, coincided remarkably with the 1820 publication in print of Jacquard's original patent. Like other British patents, this one was first printed in 1857.

Wilson had seen an example of the loom while a prisoner of war in France from 1803-1807. He gained his freedom after his wife Sarah petitioned Napoleon for his release. After returning to England, from 1810 to 1820 Wilson seems to have been engaged in finding a Jacquard loom that could be shipped back to England. This would have been difficult as few of the looms were being built in this early period, and all would have been regarded as very valuable strategic business property.

"Stephen's attempts to introduce the Jacquard loom into his company are seen in a letter sent to him, in August 1820, from Paris, by a Thomas Smith. The letter has all the appearance of being from an industrial spy. Smith described his visit to one of the largest manufactories in the environs of Paris and his examination of 'the machine'. He described the technology of 'the machine' and concluded by saying, 'I have also obtained a Hook as you desired - and also a small bit of the Paste-board [composition of the cards] to show its texture' " (http://www.heartstreatham.co.uk/streathams-french-connection-at-the-streatham-silk-mill, accessed 02-28-2016).

Wilson built a large silk mill opposite his house in Streatham for production of silk woven by Jacquard looms. He also smuggled a French weaver into England to teach Wilson's employees how to use the looms. According to The Cambridge History of Western Textiles (p. 793) the earliest surviving Jacquard-woven patterns in England date from 1825, though there is a design for a handkerchief of 1823, "but the collapse of the silk industry in 1826 made the introduction abortive."

Joseph-Marie Jacquard's Loom Uses Punched Cards to Store Patterns
A Prayerbook Entirely Woven by the Jacquard Loom: The First Book Produced by a Program, or the First Digitally Produced Book?
The Most Famous Image in the Early History of Computing
A Jacquard Weaving Depicting the Jacquard Weaving Process
Vivant Beaucé Creates One of the Earliest Lithographed Posters Advertising a New Book Published by L. Curmer