Elaborate inlaid leather front pastedown "endpaper" and Jacquard woven silk free "endpaper" in the plain morocco binding on my copy of the Livre de prières. The exterior of the binding is highly polished but completely undecorated crushed brown morocco. In contrast to the very plain covers, both the front and rear pastedowns have these elaborately inlaid designs, more like what you would expect on the exterior of the covers than on the pastedown endpapers. It may be worth noting that the style of binding of my copy differs from each of the five described and illustrated by Matthew Westerby, confirming that this copy was customized for its original purchaser. Each of the elaborate leather pastedown "endpapers" is signed in the smallest possible type at in the lower center margin. The front is signed Haupmann-Petit; the rear is signed Maillard, indicating that two different binders were involved. The colophon page identifies the makers of the entire woven book.

Jeremy Norman Collection of Images -&nbspCreative Commons
The initials ND in the center of the escutcheon on the leaf facing the title page, and the name or Noe [?] Delaitre, and the date, MDCCCLXXXVIIII (1889) in Roman numerals woven into the banderole are customized additions for the person who commissioned the production of this copy. The capital H in the lower left corner of the image is the "signature" of the weaver, J.A. Henry.

Jeremy Norman Collection of Images -&nbspCreative Commons
Here is the upper cover of the binding on my copy, laying in the jewelbox style full brown morocco case protecting the book. The section holding the binding is aquamarine velvet; the lining of the upper part of the case is blue silk. This style of a protective box is what one would associate with a case to hold jewelry rather than for protecting a book. It suggests that the original owner for whom the book was produced appropriately regarded this volume more as a kind of treasure for occasional display than a functional book. 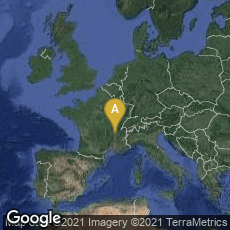 A Prayerbook Entirely Woven by the Jacquard Loom: The First Book Produced by a Program, or the First Digitally Produced Book? The entirely woven book, in the style of medieval manuscripts, is tightly bound and can only be opened this far without damage to its pages.

During 1886 and 1887 bookseller and publisher, A. Roux, in textile center Lyon, France, issued Livre de Prières tissé d'après les enluminures des manuscrits du XIVe au XVI siecle. The date on the title page is 1886, but the colophon is dated 8 September 1887. The book consists of 25 monochrome leaves (17 x 13.5 cm) of intricately woven silk, designed by R.P. J. Hervier after pages from manuscript books of hours from the 14th to 16th century. The weaving was undertaken by the firm of J. A. Henry. Perhaps 50 or 60 copies were produced.

The pages include elaborate borders, decorative initials, and three miniatures of the Virgin and Child, Crucifixion and Nativity, all produced on the Jacquard loom by J. A. Henry, the designs having been punched into many thousands of Jacquard cards. The work was issued with the approval of the Archbishop of Lyon.

The technical virtuosity, and degree of finesse achieved in this production represents a high point in the application of the Jacquard loom to the weaver's art. It is not known how many punched cards it took to produce the book, but estimates are between 200,000 and 500,000 cards to weave 400 woof threads per 2.5 cm. (approximately one square inch), demanding machine movements of not more than a tenth of a millimeter. Fine quality gray and black silk threads were used.

It took two years and close to fifty trials before the first copy of the prayer book was successfully completed. Once woven, the fragile sheets of silk were carefully folded in half and glued over a piece of very thin cardboard that served to provide the necessary stiffening to the delicate fabric. Because the book was produced entirely from Jacquard cards, in which the punch holes or lack thereof were analogous to the digital logic of zeros and ones, this entirely woven book could be considered the first book produced by what we call a program, or the first digitally produced book.

"The designer’s use of facsimile illustrations of manuscript illumination has been treated by L. Randall (1981). She notes that Hervier (whose identity she was unable to discover) used a composite manuscript facsimile entitled the Imitation de Jésus-Christ published by Gruel and Engelmann in the late 1870s or early 1880s. The donor portraits that occur in the Lyon imprint on pp. 1 and 4 occur also in the Imitation, plates XXXI-XXXII, and these plates in turn copy a manuscript from Ghent, datable to c. 1425 made for Elizabeth van Munte and Daniel Rym now on the Walters Art Museum (W. 166). Two of the large illustrations, the Nativity and Christ with the Virgin and John the Baptist, were inspired by Italian Renaissance paintings—respectively the Linaiouoli Triptych attributed then to Fra Angelico (the Nativity) and Raphael’s Disputà in the Stanza della Segnatura (cf. Randall, 1981, pp. 655-58). The Crucifixion derives from a painting by Fra Bartholomeo. The celebrated Jean Bourdichon, made popular by the facsimile of the Grandes Heures of Anne of Brittany published by Engelmann and Graf between 1846 and 1849, influenced much of the border decoration. The title page is indebted to the Grandes Heures du duc de Berry (BnF, MS lat. 919, f. 86), surely also available in facsimile during the period.

"With regard to its illustrative content, the Livre de Prières exemplifies nineteenth-century attitudes toward manuscript illumination. Through editions such as Gruel’s Imitation de Jésus-Christ, devotional publishing sought to teach catechism to children and to promote “good taste” through manuscript illumination. The Imitation de Jésus-Christ appeared in fascicules on the tenth, twentieth, and thirtieth day of each month, not unlike the serial publication of novels. With Gruel, Geoffroy Engleman, later joined by Auguste Graf, held a near-exclusive on the production of the gift book, that is, books for the Mass, “livres de raison,” and marriage books, churned out in large editions, but also sometimes written and illuminated entirely by hand by neo-Gothic artists. These facsimiles and the related neo-Gothic manuscripts went a long way toward forming a basis for the re-appreciation of medieval manuscript illumination on the eve of modern times. The Livre de Prières figures in that history of recovery. In some ways, it is an elegant, though unorthodox, version of the nineteenth-century gift book, entirely in keeping with the taste of the times (Hindman et al, 2001, esp. pp. 132-143). Comparing the Lyon imprint to gift books, Harthan declared it to be the “final exaltation of the medieval Book of Hours” (Harthan, 1977, p. 174" (http://www.medievalbooksofhours.com/boh_description-pdf/boh_84---livre-de-prieres-tisse.pdf, accessed 12-14-2013).

The original designs for the whole work are held by the Musées des Tissus et des Arts décoratifs de Lyon.

Matthew J. Westerby, The Woven Prayer Book: Cocoon to Codex. New York: Les Illumineurs, 2019. Westerby pointed out that the leaf of the Livre de Prières on the verso of the half-title, facing the title page could be customized with an owner's name. Having read Westerby's book, I took another look at my copy and noticed for the first time that the escutcheon in the designs on that leaf contains the letters ND, and that beneath that the name Noe [?] Delaitre is woven in the banderole, with the date 1889, indicating most probably that my copy was woven and bound to order in 1889. In copies that were not customized those spaces were left blank.