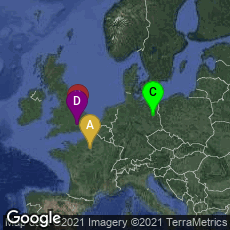 Neptune: The First Planet Discovered by Mathematical Rather than Observational Means: Discovered Simultaneously by Le Verrier and Adams The French astronomer Urbain Jean Joseph Le Verrier and the British astronomer John Couch Adams independently predicted the existence and position of the planet Neptune using only mathematics—a pivotal event in the history of astronomy. Neptune, whose existence was visually confirmed in 1846, was the first planet to be discovered by mathematical rather than observational means. The discovery of Neptune not only represents the greatest triumph for Newton’s gravitational theory since the return of Halley’s Comet in 1758, but it also marks the point at which mathematics and theory, rather than observation, began to take the lead in astronomical research. Discovered independently by two astronomers in working in England and in France, this discovery was not published in one or even two publications, but in a small group, thus making it somewhat more complicated than is usual in the study and collecting of documents in the history of science.

The discovery of Neptune resulted from the need to develop a theory explaining the motion of the solar system’s seventh planet, Uranus, the movements of which could not be completely accounted for by the gravitational effects of Jupiter and Saturn. Several astronomers since the planet’s discovery in 1781 had suggested that the perturbations in Uranus’s orbit could be caused by an as yet unknown trans-Uranian planet. However, the complex mathematics required for proving this hypothesis was so daunting that no one had attempted the task.

This situation changed in the 1840s when John Couch Adams, a young British mathematician recently graduated from Cambridge, and Urbain J. J. Le Verrier, a professor of astronomy at the École Polytechnique in Paris, each independently started working on a mathematical theory of Uranus’s movements that would take into account the existence of an eighth planet in our solar system. Adams began tackling the problem in 1843 and by 1845 had completed his solution, which later proved to predict the unknown planet’s position within two degrees. He communicated his results to James Challis, the director of the Cambridge Observatory, and to Astronomer Royal George Biddell Airy at Greenwich, but neither man recognized the significance of Adams’ achievement, and Adams’ work remained for the time disregarded and unpublished.

Meanwhile, Le Verrier had begun his own work on the Uranus problem in the summer of 1845, encouraged by François Arago, who by then had become France’s leading astronomer. On November 19, 1845 Le Verrier published his first brief paper on the subject in the Comptes rendus de l’Académie des sciences, following it with three more equally brief papers published on June 1, August 31 and October 5, 1846. These short papers, totaling only 34 pages, were preliminary to the full and detailed account Le Verrier gave of his results in the 254-page Recherches sur les mouvements de la planète Herschel; on p. 5 of that work Le Verrier referred to the Comptes rendus papers as “publications partielles.” Recherches sur les mouvements de la planète Herschel was issued both as part of France’s official astronomical annual, Connaissance des temps (equivalent to Britain’s Nautical Almanac), and as a separate offprint. The offprint can be distinguished by the presence of the publisher’s imprint and the phrase “Extrait de la Connaissance des Temps pour 1849” on p. 254.

"The planet whose position you indicated really exists. The same day I received your letter I found a star of the eighth magnitude that was not recorded on the excellent Carta Hora XXI (drawn by Dr. Bremiker) . . . The observation of the following day confirmed that it was the planet sought" (quoted in Dictionary of Scientific Biography).

In June 1846 word of Le Verrier’s trans-Uranian researches reached Astronomer Royal Airy, who had let Adams’ work on the same subject languish neglected over the previous several months. Attempting to claim priority of discovery for England, Airy ordered Professor Challis to begin searching for the new planet (which Challis observed, but failed to recognize as such, prior to Galle’s sighting), and informed Le Verrier of Adams’ results in a letter written on October 14. The resulting priority dispute, inflamed by the French press, aroused bitter feelings on both sides, but Adams remained gracious throughout. In his An Explanation of the Observed Irregularities in the Motion of Uranus, on the Hypothesis of Disturbances Caused by a More Distant Planet; with a Determination of the Mass, Orbit, and Position of the Disturbing Body read before the Royal Astronomical Society on November 13, 1846 and issued as a separate pamphlet that year, Adams gave the chronology of his own findings but explained that:

"I mention these dates merely to shew that my results were arrived at independently and previously to the publication of M. Le Verrier, and not with the intention of interfering with his just claims to the honors of the discovery, for there is no doubt that his researches were first published to the work, and led to the actual discovery of the planet by Dr. Galle, so that the facts stated above cannot detract, in the slightest degree, from the credit due to M. Le Verrier" (p. 5).

Computing the "Nautical Almanac", Called the "Seaman's Bible"
Babbage's Difference Engine No. 1 is Designed to Calculate and Typeset Mathematical Tables
Key Achievements of Leslie J. Comrie, Including Foundation of the First Independent Scientific Computing Service
The Nautical Almanac is Finally Calculated by an Electronic Computer
The British Government Provides Financial Incentive for Finding the Longitude at Sea